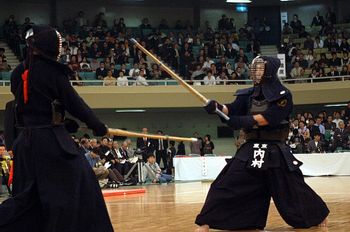 Kendo is a martial arts sport that ultimately derives from the traditional Japanese art of sword fighting, Kenjutsu. Basically, kendo is to kenjutsu what Olympics rules fencing is to Historical European Martial Arts.

Practioners of the sport are usually called Kendoka or Kenshi. It is a very physically and mentally challenging activity that combines strong martial-arts values with sport-like physical elements.

There are several types of acceptable striking targets in Kendo:

The basic rules of Kendo are simple, but there are also many intricacies: a point (or "ippon") is awarded for a decisive strike to a target zone on the opponent, which the striking contestant must indicate with a shout (or "Kiai"). The blow must be delivered with the shinai held in both hands, the string along the bamboo "blade" facing the contestant, and with only the area along the last third of the "blade": blows that are too deep or too shallow may not count. A group of three judges will watch over the match, and at least two judges must agree that an ippon is scored for the point to count. Contestants must also possess awareness and focus (also known as "zanshin") throughout the match: allowing one's concentration to waver, or displays of informality, may be penalized. Formal matches continue for ten minutes or until one contestant scores two ippon. In the case of a tie, the judges may either declare a draw, make a decision on who was the better overall fighter, or allow a match to continue into sudden death, where the contestant who scores an ippon first wins.

Most schools in Japan have a Kendo dojo, and inter-school tournaments are very common in the country. The sport is also practiced in several other countries around the world and governed by the International Kendo Federation. In Korea, the sport is referred to as Kumdo and for obvious reasons its Japanese origins are downplayed, though there are some minor stylistic difference between Korean Kumdo and its more "orthodox" Japanese cousin. Many schools overseas that trace their orgin to Korean Schools also use the name Kumdo.

A related art is Atarashii Naginata, which uses similar equipment and rules, but which arms its participants with bamboo naginatas rather than swords. It used to be that kendo was for boys and Naginata for girls, but this has broken down since the Turn of the Millennium. Naginata adds an additional bit of protective gear, the sune-ate, which covers from the knees to the ankles, and an additional valid attack ("Sune"), to the sune-ate. Kendo and Naginata actually sometimes compete against one another, in matches known as isshu jiai.

Media that portrays Kendo, or is inspired by Kendo: