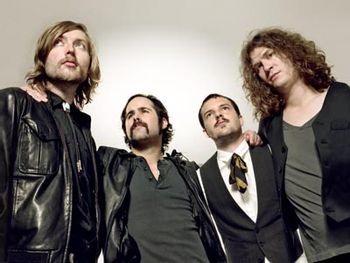 Jealousy, turning saints into the sea,
Swimming through sick lullabies,
Choking on your alibis,
But it’s just the price I pay,
Destiny is calling me,
Open up my eager eyes,
Cause I’m Mr. Brightside.
"Mr. Brightside"
Advertisement:

For an indie-rock outfit, they've been quite successful, selling 15 million albums worldwide (and with Sam's Town and Sawdust hitting UK number one).

Their sound has been (very accurately) described as "more Eighties than The '80s." All their albums save Sam's Town have been essentially synth-driven indie-rock, with the influence of New Wave, particularly Duran Duran, painfully obvious. Sam's Town was different, but also very much Eighties, being Heartland Rock/Americana In the Style of... The Boss, with some more synth.

The band took a break after years of touring, during which time both frontman Brandon Flowers and drummer Ronnie Vannuci, unwilling to slow down, released their own solo albums entitled Flamingo and Big Talk respectively. Most of the reviews agree that Flamingo was So Okay, It's Average, while Big Talk was better received.

The band released Battle Born in September 2012, nearly four years after their last album as a group.

After another four year sabbatical following Direct Hits, the band released their fifth studio album, Wonderful Wonderful, in 2017. This was followed by their sixth studio album, Imploding The Mirage, in 2020, and their seventh, Pressure Machine, in 2021.

For reference, all the band members have an extensive solo career on their own merit; and although not part of The Killer's shared output, their solo albums give an insight into what the band members were doing between Killers work.

Their music include examples of: