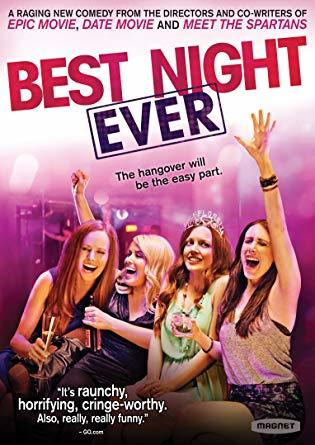 Best Night Ever is a 2014 comedy film written and directed by Jason Friedberg and Aaron Seltzer and starring Desiree Hall, Samantha Colburn, Eddie Ritchard and Crista Flanagan. Uniquely for a Friedberg and Seltzer film it is not a spoof.

Claire (Hall), a twenty-something bride to be heads to Las Vegas for a bachelorette weekend with, her uptight older sister Leslie (Colburn), her adventurous best friend Zoe (Ritchard) and her other friend Janet (Flanagan). Leslie prudishly disapproves of the whole trip, Zoe is determined to show her pal a good time before she chains herself to a man and the friendly but clueless Janet basically invited herself. Together the foursome undergo a long, mishap filled night through the streets of Vegas.

Best Night Ever provides examples of the following tropes: