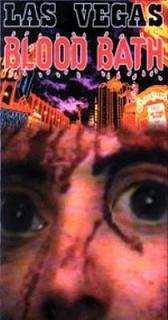 "Las Vegas Bloodbath is a simple tale about a simple man and his simple wish to appease his wife's decapitated head by killing everything with a vagina."
— Review

by Something Awful
Advertisement:

Las Vegas Bloodbath is a 1989 Slasher Movie featuring a killing spree in, you guessed it, Las Vegas.

After successfully scoring a big deal while away on business in Sacramento, a man named Sam Butler decides to surprise his wife Ruth by returning to their Las Vegas home early, in a shiny new red car. Upon arriving at the homestead, Sam discovers Ruth in bed with another man, a sheriff's deputy, and snaps, shooting them both to death with the deputy's carelessly discarded gun. After cutting off Ruth's head, Sam (who keeps having conversations with it) stores it in his car, and begins wandering the city in a misogynistic psychosis that leads him to murder a daytime hooker named Tina, whose jaw he mutilates with a knife before tying her up and ripping her leg off with the car, dumping the severed appendage in a dumpster a little later.

After randomly blowing a bartender's brains out, Sam happens to spot a car advertising the Beautiful Lady Oil Wrestlers, and follows it to an apartment, where the lady wrestlers have gathered for a baby shower being held for their friend Barbara. Skulking around the apartment (and killing a gardener who asks what he is doing) Sam observes the women as they watch themselves on TV, play cards and Truth or Dare, try on bikinis, and eat pizza for a while, before barging in and tying them all up at gunpoint, ready to enact the titular bloodbath with everything from blades to firearms to tools to his bare hands.

Noted for being the movie Brad Jones (of The Cinema Snob fame) hated the most before Nukie came along.

We try to do our best here at (inexplicable voice change) Tropey's: