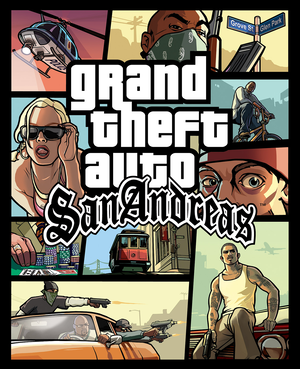 That's gonna be a hell of a story to tell when we passin' the blunt...
"After five years on the east coast, it was time to go home."
— Carl "C.J." Johnson
Advertisement:

The original Grand Theft Auto game had three cities: Liberty City, Vice City - and San Andreas. Rockstar Games took wide-open sandboxes to the next level in 2004 by turning San Andreas into an entire state, itself having three major cities: Los Santos, San Fierro and Las Venturas. It also has nearly a dozen small towns, and loads of land in between them.

The game puts the player in the shoes of Carl "C.J." Johnson (Young Maylay), a good guy, relatively speaking — a first for the series. C.J. is a gangster from the Grove Street Families who left the city of Los Santos, San Andreas after his brother Brian was killed, but is returning home after a five-year stint in Liberty City to bury his murdered mother, Beverly.

Shortly after arriving, C.R.A.S.H. officers Frank Tenpenny (Samuel L. Jackson) and Eddie Pulaski (Chris Penn) pick him up and frame him for the murder of Ralph Pendelbury, an internal affairs officer that they killed to cover up their corrupt dealings. But that's just the tip of the iceberg. There's also the mystery of the green roadster which performed the drive-by on Beverly Johnson, as well as corrupt elements within the GSF that want a slice of the burgeoning crack trade. Saving Grove Street, and ultimately Los Santos, from the machinations of C.R.A.S.H. will take C.J. all over the state of San Andreas, where he'll have to rub elbows with Chinese casino owners, rap moguls, Mexican gangbangers - as well quite a few familiar faces.

Rockstar returned to San Andreas in 2013 with Grand Theft Auto V; however, this reimagined version only depicts Los Santos and surrounding countryside (hewing closer to real-life Los Angeles and its surrounding towns than to the previous fictional depiction of Los Santos), though GTA: San Andreas's use of small rural towns is retained. Some elements of the original Los Santos remain, such as the Vinewood analog for Hollywood, and some shoutouts to the original game. Technically speaking, the sandbox play area for the game is actually much larger than GTA: San Andreas, though players have also noted that, conversely, it also feels smaller at the same time (perhaps due to there being only one distinct city in the new game). Grand Theft Auto IV, meanwhile, gave Las Venturas a cameo in one of its in-game TV commercials, suggesting it still exists and could someday be featured in another game, along with San Fierro.

Despite its age, it has been reported to still be one of the most-played games on PS2 to this day, largely due to being so big and having so much to do. As such, a remastered version was made for the IOS and Android systems, and later ported to the Xbox 360 (on October 26th, 2014, to celebrate the tenth anniversary of the game), and then the PlayStation 3 on December 1st, 2015. On October 8th, 2021, it was announced that San Andreas would see a Compilation Rerelease alongside Grand Theft Auto III and Grand Theft Auto: Vice City for PlayStation 5, PlayStation 4, Xbox Series X|S, Xbox One, and Nintendo Switch as part of the 20th anniversary of Grand Theft Auto III, with a version for mobile devices planned for the first half of 2022.

If you're looking for the 2015 disaster film of the same name, go here.

You picked the wrong tropes, fool!

Ah shit, here we go again. Worst place in This Very Wiki, Grand Theft Auto: San Andreas, Troper Country. I ain't represented The Other Wiki in five years, but the Tropers won't give a shit.

During the Green Sabre mission in Grand Theft Auto San Andreas, a cutscene shows off three wham shots in succession. These are the fact that Ryder and Big Smoke are working with the Ballas, that they have the Green Sabre (the car that was seen in the killing of CJ's mom), and that C.R.A.S.H, a group of corrupt cops, are also working with them.

During the Green Sabre mission in Grand Theft Auto San Andreas, a cutscene shows off three wham shots in succession. These are the fact that Ryder and Big Smoke are working with the Ballas, that they have the Green Sabre (the car that was seen in the killing of CJ's mom), and that C.R.A.S.H, a group of corrupt cops, are also working with them.