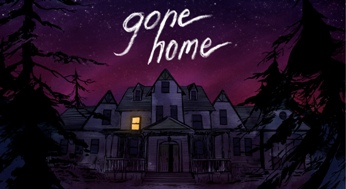 Gone Home is a 2013 Environmental Narrative Game developed by Fullbright (known as the Fullbright Company at the time of release). You play as Kaitlin "Katie" Greenbriar, a college student. On June 7th 1995, she returns to the States after traveling abroad for a year, during which time her family has moved to a new house. Katie took the midnight flight home, because it was the cheapest, and took the shuttle home so her mother wouldn't have to pick her up. But everything isn't like she expects. She arrives home to a locked door and an empty house, and has to figure out where everyone went and why they're gone.

The game is more an exercise in narrative fiction than a game, heavily focused on exploration, and with few actual 'puzzles', but many hidden notes and tidbits easily missed if you don't scrutinize everything. Much like Dear Esther, a narrative unfolds as you explore the house, primarily chronicling Katie's younger sister Sam's life at home while Katie was abroad.

The game was critically acclaimed and moderately commercially successful. Fullbright went on to release Tacoma in 2017.