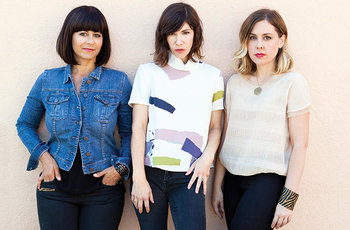 Sleater-Kinney are an Alternative Rock band heavily associated with the Riot Grrrl scene. They're the longest-lasting band in that scene, forming in 1994 and going on from hiatus from 2006 to 2014.

The band was formed in Olympia, Washingtonnote they later moved to Portland by guitarists/vocalists Corin Tucker (formerly of Heavens To Betsy) and Carrie Brownstein (formerly of Excuse 17). They named themselves after the Sleater-Kinney Road in Lacey, Washington, where their first practice space was. Their drummer for the first two albums was Lora MacFarlane, who was replaced in 1997 by Janet Weiss.

While Sleater-Kinney began as a more-or-less typical Riot Grrrl band, they distinguished themselves from the start by lacking a bassist - the role was more or less fulfilled by Tucker's downtuned rhythm guitar. With 1997's Dig Me Out, they started Growing the Beard and experimenting with their style; their new, more melodic and complex sound received much critical acclaim.

Since their hiatus, Corin Tucker now has a solo career going, while Carrie Brownstein and Janet Weiss are in the Supergroup Wild Flag alongside Mary Timony (formerly of Helium and Team Sleep) and Rebecca Cole. Brownstein has a long career as a writer, dating back to when she was a staff writer for The Believer magazine while still a member of the band. She wrote the popular blog Monitor Mix for NPR for several years and can currently be seen in Portlandia, a sketch comedy show she co-created, co-writes and co-stars in with Fred Armisen.

The band reunited in 2014 for a new album, No Cities to Love, which was released in 2015 and tour. They will release a new album, The Center Won't Hold, produced by StVincent, in August 2019, and are set for an American tour in the fall of 2019 and a European tour the winter of 2020.

Drummer Weiss announced she was leaving the band on July 1, 2019. No replacement has been announced.