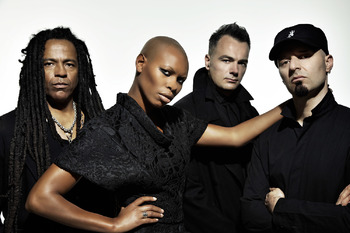 Skunk Anansie are a British Alternative Rock band formed in 1994. Their heyday was from 1994 to 2001 before they broke up. They reunited in 2009 with a lower profile. They attracted a lot of press at the time for having a singer who was black, female, bald and openly bisexual with a black bass player and white drummer and guitarist in contrast to the normal "four straight white guys" profile of 90s alternative rock bands. Skin, the outspoken lead vocalist often tackled racism and homophobia in both their songs and concerts.

The band is named after "Anansi", a spider-man Trickster God (no relation to the comic book character) from African folk tales and the slang term for a strong version of cannabis.

Tropes applying to the band: