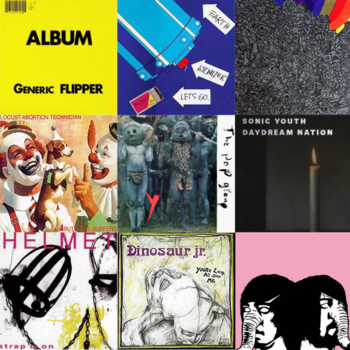 Noise Rock (alternately known as "noise punk" or just "noise") is Exactly What It Says on the Tin: a genre of rock with a focus on abrasive noise. Noise rockers for the most part have a pronounced fondness for creating ear-bleeding music with the standard rock instrumentation; how important other factors are, such as melody or lyrics, varies from band to band. (Compare, for example, Sonic Youth to Lightning Bolt, Boredoms to The Pop Group. The differences in the songwriting department are far more striking than the similarities.) Noise rockers are known for their confrontational performances, unsurprisingly enough.

Noise rock's antecedents can be traced to proto-punk bands like The Velvet Underground and The Stooges, the No Wave scene, and Hardcore Punk. (And that's not even counting all of the bizarre Japanese groups dating back to The '60s like Les Rallizes Dénudés, or the quirked-out pre-Sex Pistols aberrations like Half-Japanese, which while obscure have made a huge impact on the genre.) The genre as a unified movement emerged in The '80s and has bubbled underground ever since, with the occasional moment where some band gets really popular. Noise rock was also an influence on Shoegazing, Grindcore, Industrial Metal, Drone Doom, Grunge, and a few varieties of Hardcore Punk and Metalcore. It also very commonly overlaps with Post-Hardcore, and most noise rock acts comfortably fit within that genre as well.

Not to be confused with Noise Pop, which is something slightly different.