Heavens To Betsy was an Indie Punk Rock band from Olympia, Washington. 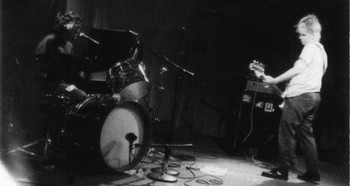 The band was formed in 1991 by vocalist/guitarist Corin Tucker and drummer/bassist Tracy Sawyer. Long-time friends Tucker and Sawyer were both students of Evergreen State College in Olympia and were inspired by the rapidly growing Riot Grrrl movement. The band's name originated from the old American term meaning of exclamation, fear and shock. Heavens To Betsy's songs often tackled issues of domestic violence, sexism and sexual abuse.

One of the band's earliest performances was on the first day of the 1991 International Pop Underground Convention, a six day music festival which boasted the likes of Bratmobile, 7 Year Bitch and Bikini Kill amongst others. The band's performance took place on the day entitled Love Rock Revolution Girl Style Now, a concert which is considered to be a crucial moment in the commencement of the Riot Grrrl movement.

The band recorded a demo tape in February 1992, contributed to various compilation albums on independent record labels and released three singles over three years. Their first and only full-length album, Calculated, was released on Kill Rock Stars in 1994.

At a 1993 show, Corin met Carrie Brownstein for the first time and Heavens To Betsy began playing shows with Brownstein's then band Excuse 17.

In 1994, Tucker formed Sleater-Kinney with Brownstein. Originally beginning as a side project, the band would eventually evolve into their main focuses as both Tucker's and Brownstein's respective groups came to an end. Heavens To Betsy's debut and subsequently only album Calculated was reissued in 2014 by Kill Rock Stars, while a number of the band's songs can be heard in the 2013 video game Gone Home.

Heavens To Betsy provide examples of: