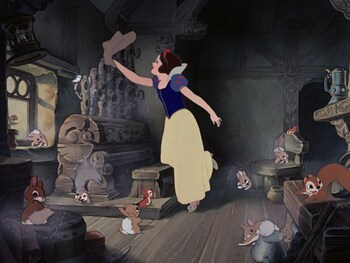 ♬ Just whistle while you work/And cheerfully together we can tidy up the place/So hum a merry tune/It won't take long when there's a song/To help you set the pace ♬
"Trill a cheery tune in the tub
As we scrub a stubborn mildew stain
Pluck a hairball from the shower drain
To the gay refrain of a happy working song..."
— Giselle, Enchanted
Advertisement:

Just for Pun and Exactly What It Says on the Tin: Doing work to the tune of music. Disney musicals love this one: "Whistle While You Work" practically defines it. Could go all the way back to using drums to synchronize rowers in galleys, depending on your definition of music.

Truth in Television, though usually with lower production values. See also Mickey Mousing. If the chores are part of their profession, it overlaps with Job Song.

We Can Help Out Cinderelly

The mice sing a fun song as they make a dress for Cinderelly.

We Can Help Out Cinderelly

The mice sing a fun song as they make a dress for Cinderelly.