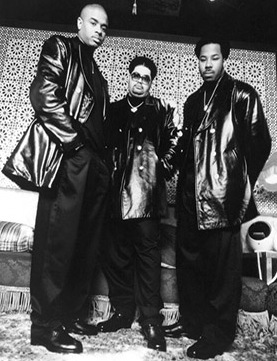 Dwight Errington Myers (May 24, 1967 - November 8, 2011), better known as the "Overweight Lover" Heavy D, was one of the earliest breakthrough artists of the New Jack Swing era, and a staple of hip-hop's "Golden Age".

Born in Mandeville, Jamaica, Myers and his family moved to Mount Vernon, New York in the 1970s, where he was raised for the majority of his life. Sometime during the eighties, Myers formed the rap group "Heavy D & The Boyz," With friends Glenn "G-Whiz" Parrish, the late Troy "Trouble T. Roy" Dixion, and Edward "Eddie F" Ferrell.

Around 1987, the then-new Uptown division of MCA Records signed Myers and his group to their label. Backed by production from group member Eddie F, Marley Marl, and a then-unknown Teddy Riley, the group released their first album Living Large, which cemented his Casanova persona as the "Overweight Lover". Despite not being an initial commercial success, It helped pave the way for the their second album Big Tyme, which hit the top twenty of the Billboard 200, and spawned multiple top ten R&B and rap hits. The success of the album led to Myers being featured on Janet Jackson's "Alright" (Which would be his biggest hit on Billboard's "Hot 100", peaking at number four), As well as her brother Michael's single "Jam". Around 1990, Myers and Eddie F were tapped to record the theme song to the sketch show In Living Color! (and it's eventual spiritual successor, Mad TV). However, 1990 soon became a very sombre year for the group.

On July 15, 1990, after coming out of a successful live show, Myers and the Boyz were goofing around on a parking structure outside the arena. According to Myers, a friend of the crew rolled down a plastic garbage dumpster towards the crew as a prank. The group, not realizing the dumpster was plastic, jumped out the way. Tragically, T-Roy had jumped onto the wall of the ramp and lost his balance, and died due to head injuries from the resulting two-story fall. The group's next album, Peaceful Journey, would be dedicated to T-Roy, as well as the hip hop classic, "They Reminisce Over You (T.R.O.Y.)", by Myers' own cousin, Pete Rock.

The year 1993 saw a markedly different sound come from the group. Dropping Teddy Riley and Marley Marl from production duties, Myers released Blue Funk. Moving away the New Jack Swing sound almost entirely, Producers DJ Premier (of Gang Starr), Tony Dofat, Pete Rock, and Jesse West, brought in a more streetwise sound for Myers. Blue Funk is also notable for featuring the solo debuts of Busta Rhymes and Myers' former labelmate, The Notorious B.I.G.note Andre Harrel, founder and, at the time, head of Uptown, had fired Sean "Diddy" Combs, as they often clashed with each other (ironically, it was because of Myers Diddy was even working there at the time). Since Combs was the one who signed him, and convinced him to give up his street life for a rap career, Biggie left with Combs to form Bad Boy Entertainment. However, the shift from his well-known radio friendly persona caused Blue Funk to be his first album since Living Large not to go Platinum. Around this time, Myers started dabbling in acting, appearing on various television shows and off-Broadway plays.

1994 and onwards saw several changes for Myers. Alongside him and the Boyz releasing their fifth album Nuttin' But Love, a return to their radio friendly stylings, He had become the mentor of the R&B group Soul for Real, contributing to their hit single "Candy Rain." A year later, he was made the President of Uptown Records, making him the first rapper to be the head of a major label. In between all of this, Myers and the Boyz mutually disbanded. 1997 saw the start of Heavy D's solo career. Despite no longer having Teddy Riley or the Boyz in his corner, Myers managed to go Platinum again with the release of Waterbed Hev, with guest spots from the Lost Boyz, Soul for Real, and Tha Dogg Pound. He also collaborated with legendary blues musician B.B. King on the latter's album Deuces Wild, rapping on the track "Keep It Coming".

In 1999, the same year as the release of his album Heavy, he appeared in the film adaptation of The Cider House Rules as Peaches. Unfortunately, not only did Heavy turn out to be Myers' worst selling album, barely managing to go Gold, Both MCA and Uptown Records were absorbed into Universal Records, with Uptown remaining inactive to this day. The higher ups at Universal did not forget about Myers, however, and made him the senior Vice President of the main Universal label.

in 2008, nearly 10 years after his final release for Universal, Myers released Vibes, a straight reggae album with no rapping that helped re-establish his music career. 2011 also saw the continuation of his career's resurgence. He released his ninth album Love Opus in September of that year, and reunited on stage with Eddie F at the BET Awards in October, their first live televised performance together in over fifteen years. It would also turn out to be Myers' last. A month later, after returning from a UK Michael Jackson tribute performance, Myers unexpectedly died due to an undetected blood clot in his lungs.

Myers continues to be remembered as one of the few rappers who was considered a legitimate Big Good in the music industry.

The overweight tropes are in the house!