Video Game / Beyond the Beyond 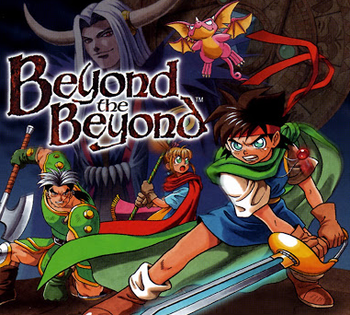 The plot is as follows: a war erupted between the surface-dwelling Beings of Light and underground-dwelling Warlocks of the Underworld, with the two sides eventually agreeing to a ceasefire after untold amounts of damage. This peace would last for hundreds of years until the "Vicious Ones", a quartet of powerful underground sorcerers, broke through the boundary separating the two worlds and started causing trouble. Finn, a young knight-in-training, is sent from his home of Isla Village to investigate the matter after learning about an attack on Marion Castle by the Bandore Empire.

As this was Camelot's first "true" Eastern-styled RPG (most of its previous games were either tactical RPGs or dungeon-crawlers), Beyond the Beyond took flak for its sometimes confusing game mechanics and uninspired characterization and plotting (though there were one or two unique twists toward the end). It would be a few years before Camelot would attempt this genre again with the Golden Sun games.

Has nothing to do with Beyond the Impossible, the manga of the same name, a light novel with a similar name or the unproduced sequel to the Lucio Fulci film The Beyond.