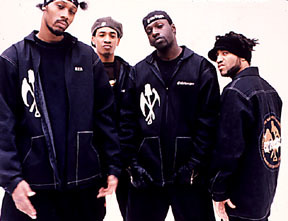 From left to right: The Rzarector, The Undertaker, The Gatekeeper and the late Grym Reaper
Advertisement:

Their first album, Niggamortis (more widely known as 6 Feet Deep in the United States), is one of the most widely appraised Horrorcore albums, and features some of the darkest production by Prince Paul. Their next album, The Pick, the Sickle and the Shovel, featured production by RZA and a calmer sound, while the lyrics combined their usual Horrorcore fare with sociopolitical issues. Nightmare in A-Minor was recorded without RZA and Prince Paul, who had left the group. After Poetic's death in 2001, the group remained inactive until recording a new track, "2 More Cups of Blood" in 2010, and announcing a new Gravediggaz album in 2011.

Not to be confused with Grave Digger, a German metal band.