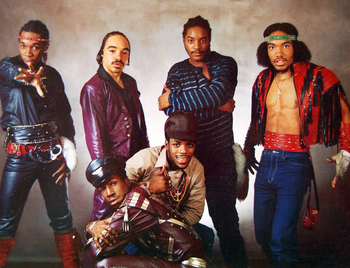 Grandmaster Flash and the Furious Five are one of the pioneers of Hip-Hop. They introduced many innovations that are still a cornerstone of the genre today. Grandmaster Flash was a skillful DJ and turntable expert, who introduced the backspin technique, punch phrasing and perfected scratching. Band member Keef Cowboy was the first to use the word hip hop, while Cowboy's brother Melle Mel was the first rapper to call himself MC (Master of Ceremony).

They are best known for their three hit singles The Message, The Adventures of Grandmaster Flash on the Wheels of Steel and White Lines (Don't Do It) and are seen as the progenitors of Conscious Hip Hop and Political Rap. While many other hip hop acts were basically clowning around, Grandmaster Flash and his band used their skills to provide socially conscious messages about the hardships of modern life.

Despite being huge during the early 1980s the band faded away halfway the decade. Grandmaster claimed his label didn't pay their royalties and tensions in the band caused a split. Grandmaster Flash, Kid Creole and Rahiem continued as Grandmaster Flash, while Melle Mel, Cowboy and Scorpio went on as Grandmaster Melle Mel & The Furious Five. They briefly reunited in 1987 for a charity concert. Band member Cowboy died of a cocaine overdose in 1989. A definitive reunion came about in 1994, but they never managed to return to the charts again. Their musical contributions haven't been forgotten, though. In 2002 they became the first rap act to have one of their songs, The Message inducted in the National Recording Registry and in 2007 they were the first hip hop artists to be honored into the Rock and Roll Hall of Fame. Grandmaster Flash, Melle Mel, Scorpio, and Raheim all continue to make music and perform, but The Kidd Creole was charged with second-degree murder in 2017 and was convicted of manslaughter in April 2022.

Albums by the band that have their own page:

Grandmaster Flash is also interviewed in the 1986 Hip-Hop documentary Big Fun in the Big Town.

Tropes on the Wheels of Steel: