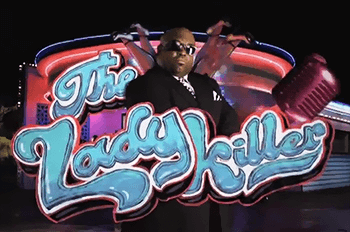 He's got swag.
Well, hello there. My name is not important. And I'm often asked, what do I do for a living? And I answer, I do what I want. Spontaneity is the spice of life, and I've indulged quite a bit. Now, I'm not above the law, and I'm certainly not lawless. But when it comes to ladies... I have a license to kill.
— Lady Killer theme
Advertisement:

Thomas DeCarlo Callaway (born May 30, 1974), better known as Cee Lo Green, is an American singer, rapper, songwriter and producer. Best known for an eclectic style that combines elements of hip-hop, R&B, and Motown soul, Cee Lo has been active with several groups since the mid-1990s and has won three Grammy awards.

Cee Lo's musical career started in 1991 when he and three friends from his hometown of Atlanta founded the Goodie Mob, the genre-naming Dirty South rap group. After recording three albums with the group, and appearing as a guest vocalist on Carlos Santana's 1999 album Supernatural, Green quit the Goodie Mob to pursue a solo career. He released two solo albums in the early 2000s, which received little mainstream attention at the time. It was during this time that he began to transition from rap to singing, a change which solidified when he and producer Danger Mouse formed the crossover group Gnarls Barkley. His first album with Gnarls, 2006's St. Elsewhere, was a major hit, reaching #4 in the United States, with its lead single "Crazy" reaching #2 on the Billboard Hot 100 and #1 in the United Kingdom (becoming the first #1 single on the UK charts to get there on download sales alone). The group's second album didn't do as well, however. Cee Lo would also reunite and perform several live shows with the Goodie Mob during this time.

During a hiatus from Gnarls in 2010, Cee Lo recorded and released The Lady Killer, his most successful solo album to date. The album reached the top ten in both the United States and Britain, and produced the enormously popular single "Fuck You!", which reached #2 in the United States and #1 in the United Kingdom. Cee Lo is currently recording new albums with both Gnarls Barkley and the Goodie Mob, and was a panelist on The Voice for four seasons.

As a solo artist

With the Goodie Mob

I see you tropin' 'round town with the girl I love:

"I still wish you the best with a fuck you!"