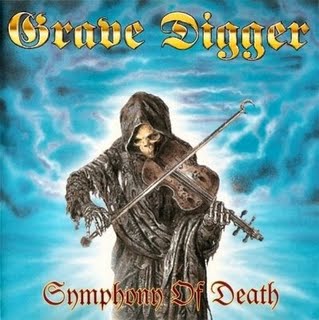 Grave Digger is a Heavy Metal/Power Metal band from Germany. Formed in 1980, they are one of the first bands, along with Accept, Running Wild, Helloween, Sinner, Cutty Sark and Rage on the German metal scene.

They are characterized by their singer Chris Boltendahl's singing style, which ranges from a polarizing screech to surprisingly clean.

Their early work emphasized on typical metal imagery of constant rocking and gritty reality. In 1987 the band changed their name to Digger and changed their sound to appeal the mainstream. This didn't work out, so the band disbanded. In the early 90's, the band was put back together and it took a darker approach and never looked back since.

Not to be confused with Gravediggaz, a Horrorcore rap group based in the U.S.