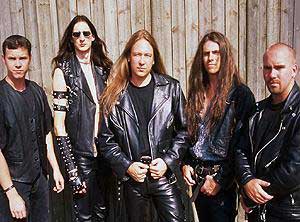 HammerFall is a power and heavy metal band from Gothenburg, Sweden, formed in 1993 by Oscar Dronjak, former guitarist of Ceremonial Oath. A good number of their songs are Hot-Blooded and heroic themed anthems.
Advertisement:

And yes, that town in World of Warcraft is named after them and the game's art director has made some of the band's album covers.

They have also released a live album, One Crimson Night in 2003, and two compilation albums, Steel Meets Steel: Ten Years of Glory in 2007 and Masterpieces in 2008. There have also been four video albums, The First Crusade in 1999, The Templar Renegade Crusades in 2002, a video version of One Crimson Night in 2003 and Rebels with a Cause: Unruly, Unrestrained, Uninhibited in 2008.