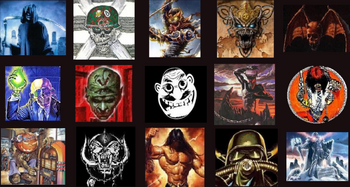 From left to right: Grim Reaper, Sergeant D, Set Abominae, Fangface, Chaly, Vic Rattlehead, Violent Mind, Not Man, Murray, Allister Fiend, Jack O. Lantern, Snaggletooth, Manowarrior, Knarrenheinz and Hector
For some reason, Heavy Metal bands often have a mascot character that appears on their album covers, posters, T-shirts, and other forms of merchandise. The mascot is usually scary-looking but often has an everyday or even silly-sounding name, tying in with the tongue-in-cheek attitude present in even creating such a character.
Advertisement:

This trope seems to apply mainly to hard rock and heavy metal (and sometimes punk as well), with band mascots virtually unknown in other genres of music.

A music-specific, non-talking counterpart to the Horror Host in its promotional role and attitude.