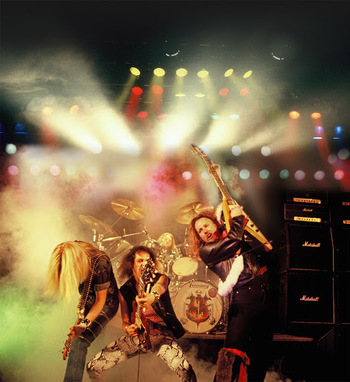 "Been a soldier since '67 and i'm in heaven!"
Advertisement:

Widely considered to be Sweden's first metal band, Heavy Load was founded in 1976 by brothers Ragne and Styrbjörn Wahlquist. Coming from a relatively well-off family, the brothers released the self-produced debut album in 1978 to almost complete silence from the critics. The band quickly gained a cult following though, and was just as important to the early boom of Swedish heavy metal as their far more commercially succesful contemporaries in Europe where. The band initially broke up in 1987 but reunited in 2017 and have among other things headlined both Keep It True and Sweden Rock Festival.