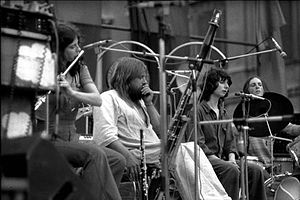 From left to right: Lindsay Cooper, Robert Wyatt, Dagmar Krause, Chris Cutlernote Robert Wyatt was never a member of Henry Cow, but he was a fan of the band and made a memorable guest appearance on their live album Concerts. Not pictured: Fred Frith and Tim Hodgkinson.
Henry Cow represented a new kind of classical chamber music; one where spontaneity was a partial component, and the instrumentation used created textures that defied those looking for tradition and convention.
—John Kelman
Advertisement:
Henry Cow was close to the ideal image of an avant-garde rock group.
—Trond Einar Garmo
Tell of the birth
Tell how war appeared on earth
Thunder and herbs
Conjugated sacred verbs
Musicians with gongs
Fertilised an egg with song
Asleep in the sphere
Her foetus was a knot of fear
She butted with her horn
Split an egg and war was born
A miracle of hate
She banged her spoon against her plate
Upon her spoon this motto
Wonderfully designed
'Violence completes the partial mind'
—Henry Cow, "War"

Henry Cow were an influential, experimental, avant-garde British rock group, which formed in Cambridge University in 1968. They are often categorized under the Progressive Rock movement that coincided with their active years in the The '70s, but their influences and aspirations went beyond the usual extended songs and romantic classical music influences that were associated with the more popular progressive rock acts, as they freely incorporated atonality, free improvisation and the influence of 20th century classical composers such as Olivier Messiaen.

The band's membership changed a good deal over the years, but the two founding members remained constant: Fred Frith (guitar, violin, occasional keyboards and much of the composing), and Tim Hodgkinson (organ, saxophone, clarinet). Later long-standing members included drummer Chris Cutler, who joined in 1969 and stayed until the end; vocalist Dagmar Krause; bassist John Greaves, and classically-trained flautist/bassoonist Lindsay Cooper. The musicians shared an attitude of seeing Henry Cow as a project to push their own abilities: there were no slackers in this band. (One of Hodgkinson's more challenging tunes, "Erk Gah", was titled after Fred Frith's exclamation on seeing the sheet music for the first time.)

The band was associated with the acronym "RIO", which stands for "Rock in Opposition", the name for a series of music festivals Henry Cow organized to unite like-minded non-commercial creative bands. These days RIO is also known as the type of music these festivals espoused. This separation from the music industry made sure that they could experiment at will, but in spite of their friendly and inclusive performance style, their experimental attitude also prevented them from ever winning a very large audience and being a commercial success. The band's influences ranged from the experimental work of Frank Zappa to 20th century modern classical music and free jazz. Equal emphasis was put on collective free improvisation, and capabilities to play from sheet music, highly arranged and thought out complicated passages.

They did get some attention in England when they signed with Virgin Records, with whom they released their first albums Legend and Unrest. They also worked and toured with a number of notable bands including Faust and Captain Beefheart; they recorded the live studio version of Tubular Bells with Mike Oldfield, and later merged with another Virgin avant-pop trio, Slapp Happy, with whom they recorded two albums. The "Happy Cow" lineup also gave them one of their most prominent members who shaped the sound of the latter half of their discography: Dagmar Krause, a German singer whose extraordinary voice could be either sweet and pretty or astoundingly harsh and caustic. Until Krause became the singer the group had mostly played instrumental music, but they began to focus on songs with lyrics. The lyrics were generally written by Cutler and often espoused a leftist worldview, critical of commercialism and western society. (Notable examples are "Living in the Heart of the Beast", which was actually written by Hodgkinson, and "Beautiful as the Moon -– Terrible as an Army with Banners").

As the 70s went on and Virgin began to shed its less commercial acts, the band shifted the focus of its activity to the European continent. They found it harder to gain an audience in their home country, which also contributed to their anti-capitalist stance. Krause's recurring ill health also inhibited their activity, but what really broke their back was the increasing creative differences within the band. Frith and Cutler wanted to write songs, but the others wanted to go on making the extended instrumental numbers that had always been the band's core repertoire. Since the band was famously democratic, with everything (down to details of song arrangements) being decided by committee, they decided to split up: Frith, Cutler and Krause formed the trio Art Bears, whose first album was largely recorded in the same studio, with the same personnel, and at the same time, as Henry Cow's final album Western Culture.

Frith, Hodgkinson, Cutler and Krause have all had remarkable solo careers and side projects, the most well-known being Naked City, which was John Zorn's band and had Frith as the bassist. Georgina “Georgie” Born, the band's youngest member and bassist from 1976—78, became a distinguished anthropologist, publishing in 2004 a major ethnographical study of The BBC.

Lindsay Cooper was diagnosed with multiple sclerosis in the late 70s, and although she made a number of memorable albums in the 80s and 90s, her progressive illness eventually curtailed her musical career. She died in 2013. The following year, Henry Cow briefly reformed for a short series of concerts in her memory.

Henry Cow's music was epic, viciously anti-commercial, boldly experimental, and relied on both free improvisation and formal composition with a varied and wide range of influences. They remain one of the most influential avant-garde rock groups to date.

The box set: The 40th Anniversary Henry Cow Box Set is a marvel in its own right, containing all of the aforementioned albums and including all of the unreleased studio recordings and live material that accumulated during their career, from the very early compositions to the free improvisations they included heavily in later concerts. It also includes a DVD with high-quality footage of a complete concert. It's since been superseded by the even more complete Henry Cow Box Redux.