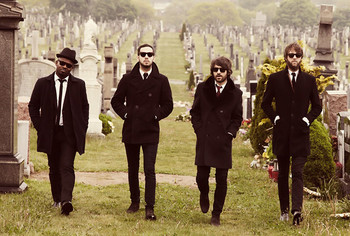 "Now there was a time
When you loved me so
I couldn't do wrong
And now you need to know"
—Opening lines from "How You Like Me Now?"
Advertisement:

The Heavy are an English rock band from Bath, Somerset. They consist of vocalist Kelvin Swaby, guitarist Dan Taylor, bassist Spencer Page, and drummer Chris Ellul. Their music is best-described as an eclectic blend of neo soul, indie rock, funk, and blues.

They are best known for some catchy songs used in various media,

namely "How You Like Me Now?" and "Short Change Hero", both of which come from their 2009 sophomore album The House That Dirt Built. The former is an upbeat song that was made prominent to American audiences when it was used in a 2010 Super Bowl commercial for the Kia Sorento that featured children's toys (among them a sock monkey and a Yo Gabba Gabba! character) going for a night on the town as if they were adults. It was also used in The Fighter, Entourage, Community, Rookie Blue, and at least three racing games: Driver: San Francisco,* along with two other songs from the band Forza Horizon 2,* both the main game (on Xbox One only) and standalone expansion Forza Horizon 2 Presents Fast & Furious (on both Xbox One and Xbox 360) and The Crew.* which even shares D:SF's developer The latter is much more moody in sound, and was used for the film Faster starring Dwayne Johnson and a trailer for Batman: Arkham City. Both songs are also used in the 2012 video game, Borderlands 2. "What Makes a Good Man" was also used as the credits theme for Borderlands: The Pre-Sequel!, serving as an appropriate ending to that game's story of a Fallen Hero. "How You Like Me Now?" was also used as the credits theme for Knack. A remixed "How You Like Me Now?" was used in the game LittleBigPlanet 3 and a smooth jazz cover of "Short Change Hero" can be heard in Poker Night 2 (which has Borderlands characters appearing).

Unrelated to the other Heavy, or a plot-driving villain.

This ain't no place for no troper: