Music / The Guess Who 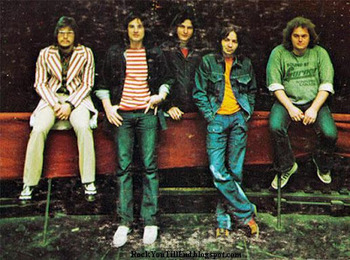 The Guess Who was a Canadian rock band that essentially became Canada's answer to The Beatles: a breakthrough rock act that helped establish Canada's presence in popular music in the rock era.

The band was originally called "Chad Allen and the Reflections," and issued a few singles under that name in Canada. Then they covered the British hit "Shakin' All Over", and the record company decided to market it as by "Guess Who?" in an attempt to build an impression that the record was actually performed by a famous British group working incognito. Members of The Beatles, perhaps? The Rolling Stones, maybe? Well, no — just a bunch of kids from Winnipeg.

It's hard to know if anyone was actually fooled by the "Guess Who?" ruse, but listeners still responded to the actual record, which topped the charts in Canada (and was a sizable hit in the US and Australia). As a result, the impromptu new name stuck — eventually becoming The Guess Who. Soon after, Chad Allen left as Burton Cummings and Randy Bachman took creative control.

Part of its rise to fame in the 1960s is that it refused to play to the dismissive trope of Canada Does Not Exist in North American popular culture. Instead, unlike other acts who went south to the US and downplayed their origins to find their fortune as disguised Americans, the Guess Who defiantly stayed in Canada, proud of their country internationally in reflection of its growing self-confidence that its Centennial helped encourage. For instance, check out this musical TV appearance from this period and notice that the recently established maple leaf Canadian flag is front and center

That confidence combined with its undeniable talent paid off in 1970 when it became the first Canadian rock band to have a #1 hit single, "American Woman," which reflected much of Canada's distinctive ambivalence living next to a super power which Prime Minister Pierre Trudeau described as like "sleeping with an elephant."

The band would have a string of international hits that would mark it as Canada's biggest band for years, especially with the 1972 establishment of the Canadian Content broadcast rulings that allowed Canadian acts to have airplay without being overwhelmed by primarily American music. Some tension between Bachman and the others, partly brought on by Bachman's conversion to Mormonism (a religion he later abandoned) led him to leave the band in 1970, forming Bachman-Turner Overdrive a few years later, as well as the later bands Ironhorse and Union. Cummings would leave for a successful solo career of his own in 1976, after which the Guess Who disbanded. Bassist Jim Kale gained control of the band name, and put out various line-ups with no other original members over the years. These lineups generally tour the US but very deliberately avoid Canada, where Canadian concert-goers are steadfastly vociferous that The Guess Who must include Burton Cummings (and very probably Randy Bachman), or they won't bother to show up.

Bachman and Cummings did pay for the right use the Guess Who name for a wildly successful Canadian tour in 1983, and again from 2000-2003. But mostly Bachman, now also famous as the host of Vinyl Tap on CBC Radio, and Cummings would tour together as the de facto reunited Guess Who as "Bachman-Cummings".

These tropes cry every night for you: