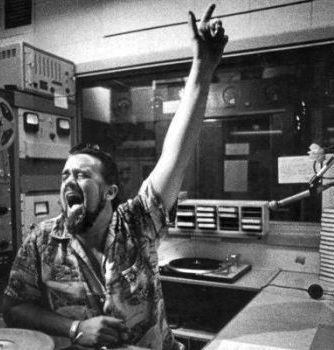 "If you do right, everything will come out right."
Advertisement:

Wolfman Jack (born Robert Weston Smith; January 21, 1938 – July 1, 1995) was an American radio disc jockey. He was famous for his gravelly voice and his trademark "wolf howl".

A native New Yorker, he was interested in radio at a young age and was particularly a fan of Alan Freed (sometimes known as the Moondog). He worked for various radio stations in places like Virginia and Louisiana for years, playing a variety of genres and adopting various personas along the way. In the early part of The '60s, he perfected the Wolfman character and hatched a scheme to broadcast on XERF in Ciudad Acuña, Mexico (which, with its 250,000-watt AM signal, could be heard across North America at night). While he gained an audience, the station itself was caught in a tug-of-war between its owners, criminal gangs, and corrupt police officers, with several gun battles at the transmitter site. Fed up with this, he moved to XERB in Tijuana, another powerful "border blaster", and his mix of rowdy rock, raw rhythm and blues, and verbal antics made him famous, especially with the station's proximity to Hollywood.

The person behind Wolfman Jack was unseen by the public for many years until he made an appearance in George Lucas’ American Graffiti in 1973. The reveal did not stop his career, as he was syndicated to oldies stations around the world and gained success as the announcer for NBC's late-night music show The Midnight Special. He would go on to do more than 80 television appearances as well a few movies, but sadly collapsed from a heart attack and died at the age of 57 in 1995.

His autobiography Have Mercy!: Confessions of the Original Rock 'n' Roll Animal was published in June 1995. The Guess Who had a hit song about him ("Clap for the Wolfman"), Todd Rundgren named a song on Something/Anything? after him, and Frank Zappa mentioned him in the liner notes to The Grand Wazoo.