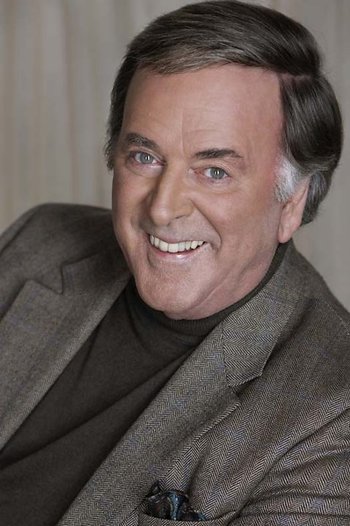 "My life has been a happy accident. Anybody who succeeds in anything should count their lucky stars, because that's the biggest element. It's not hard work; it's not necessarily talent."
Advertisement:

Sir Michael Terrence Wogan was born in 1938, grew up in Limerick and started out in the media as a continuity announcer for RTE Radio in Dublin, before beginning broadcasting for The BBC in the late 1960s. And then he ended up becoming a legend in his own lifetime.

His breakfast radio show, both on BBC Radio 1 and later Radio 2, achieved listening figures approaching 15% of the entire population of the British Isles, five days a week for twenty-seven years — 1972-2009 — even with a break in the middle from 1985 to 1993, after which he returned to the airwaves more popular than ever. He was also the Deadpan Snarker commentator on British TV broadcasts of the Eurovision Song Contest, starting in 1973 and for every edition between 1980 and 2008... even when also presenting the Contest in 1998 after Britain's win the previous year.

During and after Wogan's time away from national radio he was also a familiar face on UK television, hosting the prime-time chat show Wogan on BBC-1 between 1982 and 1992, three evenings a week for its last seven years. He had already hosted the game show Blankety Blank, spent a decade each presenting Hilarious Outtakes show Auntie's Bloomers and viewer comments/complaints show Points of View — but his most enduring on-screen role would be his association with the BBC charity Children in Need, for which he was a tireless cheerleader and fundraiser and the main presenter for its annual Telethon from its debut in 1980 up to 2014.

As an Irish citizen, Wogan was appointed an Honorary Officer of the Order of the British Empire (OBE) in 1997 for services to broadcasting and charity, and later became an Honorary Knight Commander of the same order (KBE) in the Queen's Birthday Honours in 2005. After asserting his right to British citizenship (while retaining his Irish citizenship) later that year, Sir Terry was officially knighted on 11 October 2005.

After stepping down from his daily radio show at the end of 2009, Wogan entered only semi-retirement, continuing to present a weekend show on BBC Radio 2 until late 2015. Having not publicly disclosed that he was ill, his death from cancer was announced on 31 January 2016, to national mourning.

In November 2016 the central London building Western House, where Radio 2 (among others) is broadcast from adjacent to the BBC's HQ at Broadcasting House, was renamed Wogan House in his honour.

His career contains examples of: