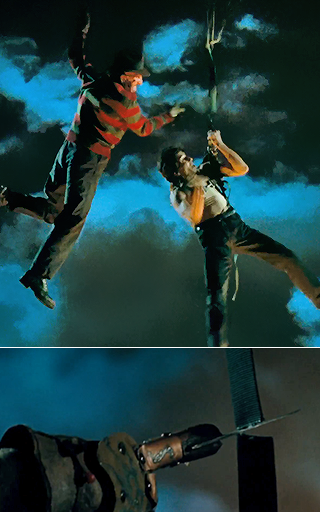 If you want to murder a skydiver, one way to do it is to sabotage their parachute, causing a parachute malfunction. This method has a number of advantages. It is almost invariably fatal, the murderer does not need to be anywhere near the victim at the time of death, and there is a good chance the death will be written off as an accident.

In the Real Life, this happens, but only rarely. There are three possibilities for sabotage: either canopy, suspension lines or harness. It must be remembered that all skydiving rigs contain not one, but two, parachutes: main and reserve. Sabotaging a parachute rig so an experienced skydiver won't notice isn't simple. To make it work, you have to sabotage both the main and reserve canopies. Most experienced skydivers are very jealous about their rigs and never let anyone else pack them, and the regulations require them to check the gear before every jump, so once the detectives work out the death was murder, they will start looking for someone with skydiving experience. This gives them a limited circle of suspects, consisting mostly of the victim's friends and associates. Double malfunctions, where both main and reserve canopies fail, are extremely rare, so suspicion of a murder instead of an accident is pretty much imminent.