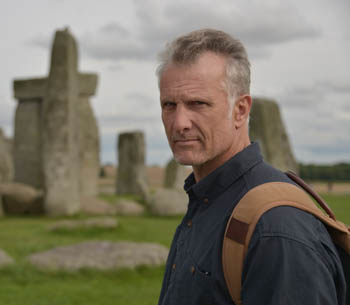 Scott F. Wolter
"The history that we were all taught growing up is wrong... there's a hidden history in this country that nobody knows about. There are pyramids here, chambers, tombs, inscriptions, they're all over this country. We're going to investigate these artifacts and sites and we're gonna get to the truth. Sometimes history isn't what we've been told."
— Scott Wolter
Advertisement:

Scott F. Wolter is an author, researcher and television host. He is known best as the host of the H2 series America Unearthed. Scott is a Forensic Geologist based out of Minnesota, he is the founder and President of American Petrographic Services and the inventor of Archaeopetrography (a process used to date and understand the origins of stone artifacts).

Scott was involved in analyzing the concrete remains of the World Trade Center after the September 11th terrorist attacks.

Scott's first television appearance was as a Kensington Runestone expert on the documentary Holy Grail In America which indirectly resulted in Scott hosting America Unearthed.

Scott is also the author of several books including:

Scott has faced controversy for: