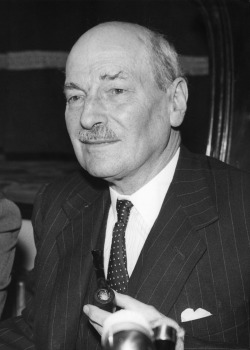 All substance and no show.
"There were few who thought him a starter,
And many who thought themselves smarter.
But he ended PM,
CH and OM,
An Earl and a Knight of the Garter!"
— Kenneth Harris
Advertisement:

Clement Richard Attlee, 1st Earl Attlee KG OM CH PC FRS (3 January 1883 – 8 October 1967) was a British Labour politician who served as Prime Minister of the United Kingdom from 1945 to 1951 and was voted the greatest Prime Minister of all time in a 2004 poll of British politics professors. He was Deputy Prime Minister under Winston Churchill in the wartime coalition government and then won a landslide election victory in 1945. He was the first Labour Prime Minister to serve a full Parliamentary term and the first to have a majority in Parliament.

Born to a well-off London family, he became a socialist after he personally saw the horrific conditions of the British working class during the early 1900's while working in a charity club. During World War I, he served in the army (reaching the rank of Major) and served in the Gallipoli Campaign, the notorious military disaster organised by his future political rival Winston Churchill. He became very involved in Labour Party politics following the war, winning in 1922 a seat in Parliament representing the very poverty-stricken Limehouse constituency in London. Attlee was one of the few Labour MPs to keep hold of his seat after the disastrous 1931 general election,note (and even, only just; he retained his seat by a little over five hundred votes, and was helped by the opposition vote being split between the Conservative candidate and one nominated by the newly-formed British Union of Fascists) which saw the party virtually wiped out and only avoid reduction to third-party status by virtue of the Liberal Party splintering into three different factions. In the aftermath, he became deputy to new Labour leader George Lansbury, as the only person who really wanted the job.

When Lansbury resigned barely a month before the next general election, Attlee was left holding the reins through the campaign, and did a creditable job of bringing the party back from the brink of extinction. While he was challenged for the party leadership after the election by Herbert Morrison and Arthur Greenwood, Attlee ultimately emerged as the new permanent leader after a backroom deal with Greenwood, who subsequently replaced him as deputy leader. Attlee would lead the party continuously for 20 years (from October 1935 to December 1955)—the longest-serving Labour leader by a country milenote (Not counting Keir Hardie, who had a combined 15 years as leader of the party and its predecessor, the Labour Representation Committee, the next longest two, Harold Wilson and Tony Blair, served 13 years apiece). Whilst he was Leader of the Opposition, he opposed Neville Chamberlain's policy of appeasement, at times viciously, and called the Munich agreement "a victory for brute force." He formed a Coalition government with Churchill and served in the war cabinet as Deputy Prime Minister from 1940 to 1945. Then in 1945, when the national unity government broke up and an election was held in July 1945, Labour unexpectedly won a landslide victory. While voters respected Churchill's war record, they were sceptical about his ability to govern in peacetime and were won over by Labour's plans to rebuild the economy and create a welfare state.

Attlee's laconic, unglamorous personality makes him seem colourless next to Churchill, but he was a supremely effective politician, as Churchill recognised; Attlee and Churchill were the only constant members of Churchill's War Cabinet from its formation in 1940 to the 1945 general election. He has been regarded as a good person with bad publicity - the Sunday Times political journalist Stephen Margach noted that the generally conservative British press went far beyond what was necessary or fair in their attacks on him: "I have never known the Press so consistently and irresponsibly political, slanted and prejudiced". Perhaps the most well-known attack on Attlee was a joke which went "An empty taxi drew up outside 10 Downing Street and Clement Attlee got out of it"note A quote often attributed to Churchill, who denied it; Churchill himself famously described Attlee as "a sheep in sheep's clothing." Still, Attlee's lack of a forceful personality in public hid his very real skills in organising a government, where he managed to successfully work with members of his Cabinet for six years without much difficulty (at least until the very end) in spite of the major issues plaguing the country.

He put in place the Keynesian economic structure that, known as the "post-war consensus", remained the cornerstone of UK policy until the election of Margaret Thatcher ushered in a new era of neoliberalism. With the widespread backing of the working class, Attlee helped create the modern British welfare state: government national insurance programs were expanded, free secondary education became a right, worker and union rights reached new highs, and housing programs were put in place to put his citizens back into homes after the chaos of the war years. Most importantly, Attlee's government nationalised many important industries and services, including the coal mines, the railroads and other infrastructure, electricity and gas services, and the steel industry; roughly one fifth of the British economy was nationalised by the time his premiership ended. His most stunning accomplishment was the creation of the National Health Service, the United Kingdom's legendary single-payer healthcare system which became the model for many other national healthcare plans. It remains extremely popular among Britons to this day, with even Thatcher deciding not to privatise it. Despite the daunting challenge of transitioning from a wartime to a peacetime economy, unemployment was decreased to nearly 2% and social inequality actually reduced, and he did all of this while running budget surpluses (at least until the UK entered The Korean War). He also dealt with the decolonisation of much of the British Empire (specifically the lands that are now India, Pakistan, Bangladesh, Burma, Sri Lanka, Israel, Palestinian Territories, and Jordan) and the development of British nuclear weapons. The British nuclear power program with the - explicitly dual use - "Magnox

" reactor note a natural uranium fueled, graphite moderated, gas cooled reactor capable of producing both power and weapons grade plutonium - the Soviet RBMK (Of Chernobyl infamy) was designed with similar goals - similar to the RBMK, the Magnox had several design flaws due to being a Master of None but unlike the RBMK, it did not have the glaring safety issues. Its successor, the "Advanced Gas Cooled Reactor

" (AGR) explicitly foregoes both the "natural uranium fueled" and the "capable of producing weapon's grade plutonium" design goals and thus eliminates some but not all of the Magnox's flaws also originated in his time in office even though it did not produce the first operating power reactor until after he had left office. And he did it all in just five years.

Attlee, therefore, has a decent shot at second place in the rankings of Prime Ministers. One poll even ranked him first. When his record is criticised, it is generally for being too naive towards the Soviet Union (at one point giving them plans for new British jet engine breakthroughs, which they proceeded to use against British forces in The Korean War) and for difficult relations with the United States. The latter, however, is not entirely his fault: the trans-Atlantic relationship was strained from the fact that FDR's successor, Harry Truman, was a bit more conservative than FDR and was far more suspicious of the USSR than Attlee ever was, to say nothing of being a very different sort of fellow (where FDR had been a high-society-fun-loving New York aristocrat who got along wonderfully with the half-Americannote Actually, half-New Yorker, so the affinity ran even deeper grandson of a duke Churchill, Truman was a straight-talking Missouri farmer boy/jack-of-all-trades whose outlook didn't quite jibe with that of Attlee's polished upper-middle-class background) and this shift was right in the middle of the peace negotiations at the end of World War II. There was also the fact that the United States had entered the war late, and had (as US historian Stephen Ambrose points out) walked away with the spoils of it, entering a period of unprecedented post-war prosperity, whereas Britain was facing a massive national debt and living off rationing. Attlee improved on the foreign policy field as he went on, such as getting tougher on the USSR and supporting the Marshall Plan, and he was instrumental in forming NATO.

Attlee's government came to end in 1951. In 1950, they were re-elected after serving a full term and but with an unworkably small majority, so another election was held in 1951. This ended with the odd result of Labour narrowly winning the most votes (a record 13.9 million votes; the only times this has been surpassed were by the Conservatives in 1992 and again in 2019) but it was the Conservatives who won a majority instead, due to some very weird technicalities and quirks in the British political system. It did not help that two major figures in his government, Aneurin Bevan and Harold Wilson, resigned not long before the election, which split the Labour Party and gave the Conservatives a major advantage. Attlee still led Labour as Leader of the Opposition for the next few years, with Churchill back in the premiership, and published an autobiography in 1954. He retired after a second defeat in 1955, and was elevated to the House of Lords. In his last few years, Attlee publicly called for the decriminalisation of homosexual acts, which happened just months before his death. He lived to see Wilson become the Prime Minister, and his party back in power for the first time in over a decade, before dying in 1967.

Certainly, with the possible exception of Margaret Thatcher and Boris Johnson (and even in the latter's case, mostly through actions he took before becoming PM), no British Prime Minister since 1945 has inculcated such profound transformation of the political, cultural and economic landscape of Great Britain since Clement Attlee. Thatcher herself (along with Harold Wilson) considered him to be the greatest PM of her own lifetime, because though she disagreed with his views, she admired how effectively and radically he had implemented them, describing him as "all substance and no show" and "a serious man and a patriot". Attlee's historical reputation suffered on account of him being the man who unseated Winston Churchill, but nowadays he is remembered as the father of the National Health Service and one of the greatest Prime Ministers in British history. It wouldn't be until late in The New '10s, following a major rightward shift in the country's overall political landscape, that Attlee's reputation finally started coming under sustained attack from conservative commentators, who've typically accused him of creating an overly centralised, tax-heavy economy that would end up causing major problems in the 1970s. However, these attacks rely on the idea that Churchill would have rebuilt the country into more of a free market economy had he remained in power after the war, something that would have been politically untenable given the country's war-torn state (not to mention that it would have been the opposite approach to virtually every other major country's governments of the time). More pertinently, not only did Churchill not reverse Attlee's reforms to any significant degree after he returned to power, nor did any of the other Conservative PMs until Thatcher, making it hard for Attlee alone to be blamed for any issues that may have resulted from them.