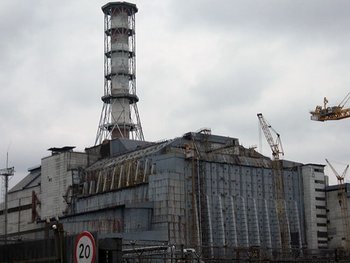 Reactor 4 of the Chernobyl Power Plant entombed in the concrete 'Sarcophagus' as it looked from 1986 to the late 2010s. 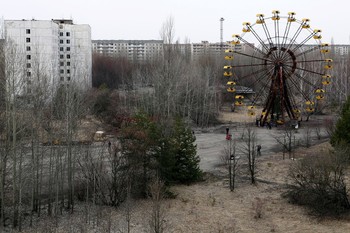 The abandoned city of Pripyat, near Chernobyl. 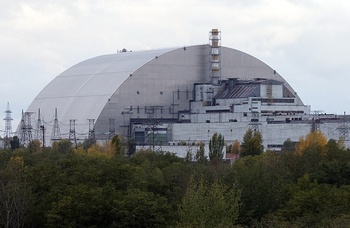 The New Safe Confinement covering the plant, completed in 2019.
"Look at this place. Fifty thousand people used to live here. Now it's a ghost town. I've never seen anything like it."
— Captain MacMillan on Pripyat, Call of Duty 4: Modern Warfare
Advertisement:

The site of what is often regarded as the worst disaster in nuclear power history, the Chernobyl (AKA Chornobyl or V.I. Lenin Memorial) Nuclear Power Plant was one of the Soviet Union's biggest and most modern nuclear plants, designed to give power to the city of Kiev / Kyivnote "Kiev" is the transliteration from Russian to English, while "Kyiv" is the transliteration from Ukrainian to English. Nowadays, most Ukrainians don't like "Kiev" being used., Ukrainian SSR (now Ukraine). The disaster was the first accident to score a 7 on the International Nuclear Event Scale, its highest rating (the only other with this rating is the Fukushima Daiichi disaster of 2011), and surrounding areas remain uninhabitable to this day.

The disaster, which happened on April 26, 1986 at 01:23 am Moscow time, was the result of several factors. The RBMK reactor designs used in Soviet plants were inherently flawed in two ways; firstly, if the connection to the main electrical grid was lost, the reactor's cooling systems would lose power, and the diesel-powered backup generators would take over a minute to provide sufficient power to cool the reactor, which could lead to a meltdown in the interim. Secondly, the reactor could heat up very quickly and had an (unknown to its operators and most nuclear scientists, thanks to the state suppressing the information after it was discovered in 1983) tendency to surge power levels when a SCRAM (AZ-5) button was pressed to stop the reaction. Reactor #4 (the newest of Chernobyl's reactors and the one in which the accident occurred), like all RBMKs had a strong containment structure on the side, but not on its roof.note (They weren't included in the design, as it would have been prohibitively expensive for a reactor as bulky as the RBMK. Not that a full containment structure would have survived the explosion — the less violent Fukushima Daiichi disaster in 2011 was still enough to completely destroy the containment structures at that plant — but it would have at least absorbed enough of the explosion to limit the fallout to a much smaller area) The plant personnel were also carrying out a dangerous test with Reactor #4 for power outage protocols at night (since they didn't want to interfere with citizens' electricity usage) with inexperienced workers. note The test was originally scheduled for earlier in the day, but Kiev's power grid controller asked for a delay due to end of month power requirements requiring the plant remain at 1600MW power for longer than it was supposed to, which led to a build up of xenon in the reactor that did not go away when the test got underway 11 hours later. By then, a shift change had occurred, and the experienced reactor operators were relieved by less experienced personnel not familiar with the test protocols.

The test involved reducing the reactor's power to 700MW in order to simulate a blackout, and see if this was sufficient to power the cooling systems until the diesel generators could kick in. However, the reactor core had been "poisoned" by a build-up of xenon gas due to a delay in the test, causing the power to start dropping below the desired figure. Then, due to what has been variously attributed to either an error on the part of the inexperienced reactor operator, Leonid Toptunov, or a malfunction caused by the reactor systems not knowing how to handle operation with such high xenon levels, an attempt to stabilize the power level had the opposite effect and resulted in the reactor crashing down to a mere 30MW. By all rights the test should have been abandoned at this point, as it would have taken a whole day for the xenon to decay away. The test's supervisor, Anatoly Dyatlov insisted on trying to continue, however, and despite his best efforts, Toptunov was only able to restore the reactor to 200MW, which Dyatlov figured was still good enough to continue (the RBMK was notoriously unstable at low power levels, but operating it at such a low level technically wasn't against regulations).

As they tried to maintain a delicate balance between cooling the reactor and powering it, things slowly got more and more out of hand. Then, communication between both sides got cut off. The explosion occurred when after several desperate corrections, the side controlling the graphite-tipped control rods (which had already taken out a dangerously large number of them to begin with) noticed that things were going wrong, and put too many back into the reactor all at once, triggering the disaster. The explosion wasn't like, say, a nuclear bomb explosion (where the relatively small bomb reaches millions of degrees), but more comparable to a boiler explosion (where the water temperature gets so high the vessel can't contain the pressure).

As this was still during the years of the Soviet Union, and Mikhail Gorbachev had only been in office for a year at this point, news about the disaster was slow to come out. The day after the disaster the people in the nearby company town of Pripyat were just minding their own business as usual, and it was not until the second day that action was actually taken: the government forces showed up at Pripyat and told everybody to pack only their essentials (they claimed the citizens of Pripyat could return later) and evacuate immediately. The radiation spread through Belarus, and the Kremlin remained tight-lipped. Then it spread to the Baltic states, and the Kremlin remained tight-lipped. Then the radiation reached the Capitalist bloc in Sweden... and that's where the cat got out of the bag and the Soviet Union had to admit that the accident happened. The international reaction led to a halt of almost all nuclear reactor development worldwide, with some (such as Italy) going so far as to close down their nuclear plants. Many neighboring areas to the plant were made instantly unsafe for habitation, with a 30 km Exclusion Zone established, with cities in the zone (most notably Pripyat, the city where workers of the plant lived) remaining ghost towns to this day.

The Soviets also had to contend with the plant remains, given that there was (and will be for the next several thousand years) enough plutonium inside Reactor #4 to potentially poison one hundred million people. Their initial response was to haphazardly have hundreds of thousands of men wearing lead suits each take a turn briefly pushing some of the debris on the top of the reactor building down into the reactor for three minutes each, since the radiation levels were so high that doing it any longer would be extremely dangerous, even in the best radiation protection suits available. Once this was done, they hastily built a temporary containment structure (the "Sarcophagus") around what was left of Reactor #4. The plant remained operational until they could safely decommission each of the other reactors, with the plant finally closing down in the year 2000. Since the containment structure was meant to only be a short-term solution, a giant moving arch structure called the Chernobyl New Safe Confinement was built next to the plant. After several delays, the arch was moved into place in November 2016, and the end wall was completed in late 2018.

Containment cost the Soviet Union 18 billion rubles,note The Soviet ruble was on a 1:1 exchange rate with the United States dollar at the time; adjusted for inflation, this would be roughly USD $39 billion in 2015 and has cost hundreds of billions of dollars in containment and treatment since. The disaster was also a major factor in the collapse of the Soviet Union in 1991 — the immense cost of cleanupnote not to mention the Afghanistan War was still going on at the time and was itself a huge drain and cost for the Soviet government, the fact that attempting to cover up the incident only made it worse, Valery Legasov's testimony and his tapes coming to light after his suicide, the human toll of the disaster and General Secretary Mikhail Gorbachev's push for more openness to the world (his glasnost policy) all cascaded and led to the superpower dissolving five years after the incident. The Chernobyl disaster led to 31 immediate deaths, with cancer deaths in Soviet Union estimated to be in the thousands, and estimations vary wildly on the effects and number of deaths the radioactive cloud caused throughout Europe (via thyroid cancers most notably). Cow milk in some parts of Ukraine still has five times the safe level of radiations as of 2019.

On February 24, 2022, the first day of that year's invasion of Ukraine by Russia, elements of the Russian army captured the Chernobyl exclusion zone and nuclear power plant, disturbing the rotation of the staff working on the decommissioning. The Russians would occupy the area for about a month. Against the warnings of the Chernobyl decommissioning staff, Russian forces took to using the Red Forest — still one of the most contaminated areas in the exclusion zone — as a route for convoys involved in the offensive against Kyiv. The resulting foot and vehicle traffic, as well as the digging of trenches, churned up large amounts of radioactive dust that gave a number of Russian soldiers radiation sickness. Russian forces began to withdraw from the Kyiv area after failing to take the capital and amidst the recapturing of territory by the Ukrainian army; Russian troops were reported to have left the Chernobyl nuclear power plant by April 1. The threat of another nuclear disaster has since been looming at another plant, that of Zaporizhzhia, in and around which Russian occupiers have installed weaponry.

Contrary to popular belief, the Exclusion Zone is not as unsafe as you might think, though the plant is still highly radioactive and it is not recommended to get very close to it. While travel into the Exclusion Zone is strictly controlled and usually available only through tour groups, Pripyat (which is closest to the plant) and Chernobyl are safe to visit and are fairly well preserved Soviet ghost towns, though staying there longer than with the tour groups would be unwise, and you would do well to listen to your tour guide's instructions while you're there. The Exclusion Zone has also become an unintentional wildlife preserve, with many scientists studying the effects of radiation on such life, though with few exceptions, animals in the area don't seem affected by it much note This seems to be due to most species like birds and small mammals having short enough lifespans that they don't typically get exposed to enough radiation to have any health effects result. Longer lived, slow growing species like the Wels catfish seem to be much more vulnerable.

Due to being home to ghost towns, the impossibility of detecting radiation without proper tools until it's too late, the abandoned plant itself being incredibly ominous and foreboding and giving off a very unsettling feeling, Chernobyl and its surrounding area lends itself well to horror and post-apocalypse settings. You can actually wander the area yourself without leaving your home, as the city is recorded in "Street View" mode on various popular map programs.