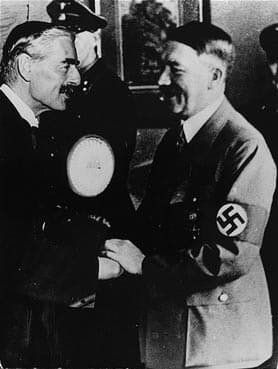 Yes, in fact, this was once the same image used to illustrate the Head-in-the-Sand Management article.
"The only shield to the man is his memory. The only guide to his conscience the rectitude and sincerity of his actions."
— Winston Churchill, on Neville Chamberlain
Advertisement:

Arthur Neville Chamberlain (18 March 1869 – 9 November 1940) was a British Conservative politician who served as Prime Minister of the United Kingdom from May 1937 to May 1940.

An often misunderstood politician, this article will very briefly cover what the media will tell you, and then an alternative viewpoint.

Chamberlain's history in the modern media almost begins and ends with the "peace in our time" quote.note Which was actually "peace for our time". He became Prime Minister of the UK, signed the Munich Agreement with Adolf Hitler, declared there would be 'peace for our time', stuck his head in the sand and ignored Hitler's aggression, and then had to resign after declaring war on Germany for her declaration of war upon Poland.

That's good enough for high school history, but there's a lot more to him–and his decisions–than that. For a start, while he was a member of the Conservative Party, he was not really a Conservative. He described himself as a Unionist, referencing the defunct Liberal Unionist party his father had been in.

Whilst his quote is mostly recalled for its ironic value, Chamberlain was neither naïve nor stupid. "Appeasement" was seen as the only politically acceptable option, and Hitler's megalomania was not apparent thanks to his meticulous management of his public image. Though he publicly proclaimed that the move would avert war, he started Britain's programme of rearmament just to be on the safe side. His wisdom and foresight paid off when he was forced to declare war upon Germany in aid of Poland in September 1939… and the public rallied behind him and a war they then understood was inevitable note  French public opinion, on the other hand, was at least partly of the opinion that Poland was none of their business.

The most important factor in his decision not to risk war was undoubtedly his (correct) judgement that the British and particularly French public would not support war if he had been seen to reject diplomacy. A big part of the popular support behind the later coup by Marshal Pétain and Admiral Darlan, and the lack of prominent French partisan movements until 1943, was a widespread belief that Britain had selfishly dragged France into a war that wasn't in her interests. The USSR's rhetorical willingness to defend Czechoslovakia's sovereignty would not have translated into a Soviet–German war either, as the military dictatorship of Polandnote Poland having already fought the Polish-Soviet War of 1919-21 and had little trust in Stalin would never have given their greatest enemy military access.

Munich was also not a clear-cut example of NSDAP-German aggression or expansionism - the ethnic Germans of Bohemia-Moravia had consistently voted for extremist nationalist parties (Communist or Fascist) who had advocated independence or political union with Germany in every general election since the country's formation in the aftermath of World War I. The demands for Polish territory in 1939 were very different as The World had had a very dramatic insight into Hitler's actual and astonishingly radical agenda (re: the annexation of Bohemia-Moravia and the subjugation of Slovakia).

On a final note, while Germany was far more unprepared for war than The Allies in 1938 Chamberlain was quite right to think–thanks in large part to the advice of Stanley Baldwin–that The Allies' material advantage would only increase over time, and that Britain would in any case need at least two years of all-out armament (as she had last time, in 1916) before she would be able to field armies of comparable size to those of France and Germany. In fact, by 1935, he had already realized Hitler was a danger to European peace and advocated strengthening the Royal Air Force, and immediately after Munich he commenced such a program of rearmament. The very first thing he did on his return was meet with representatives of various industries to get them to ready for war; many factory workers did their first overtime ever in the weeks following the Munich treaty to meet the government's new orders. Whether this was the "right" thing to do or not (given France's poor operational-level performance against German forces in 1940, something greater German unpreparedness could have rendered moot) is still a matter of historical debate, though the wisdom of his decision at the time should be quite apparent from what we've brought up so far (for your browsing pleasure).

It's worth noting that the Germans were well aware of this strategic imbalance as well, with German generals so petrified of war in the fall of 1938 that they seriously considered (but ultimately rejected due to faith in National Socialist principles and Hitler) a coup against Hitler before Chamberlain's agreement made that unnecessary. The Czechs, incidentally, see Chamberlain as one of the great traitors of history, calling his agreement the "Munich Betrayal", as it was their nation-state that was handed over to Hitler without them even being represented at the negotiations.

There was also the matter that the UK didn't want to go to war if it could avoid it at all– war over the Czech Germans wouldn't have just been controversial, it would have been deeply unpopular if not unjustifiable to the French leadership and public. Chamberlain wasn't the only Allied leader at Munich, it must be remembered—Prime Minister Édouard Daladier also approved of negotiation for the same reasons. World War I had killed a million each of both countries' best and brightest young men, and even though their reserves of trained manpower had been replenished (and stood at nearly a dozen times that of Germany's), the psychological aversion to warfare hadn't. The antiwar stance was the one which best represented public opinion at the time, the Munich Agreement being generally popular in Britain and France with Winston Churchill being the most famous of a mere handful of dissenters. A Mass Observation poll of the time put public approval for Munich at about 60% and opposition at 30%, the rest being undecided.

On September 1, 1939, the Wehrmacht crossed the border into Poland, a country that Britain and France had promised to defend from German aggression. Recognizing that the time for peace was over, Chamberlain issued an ultimatum to Hitler: withdraw his forces immediately, or face war. On the deadline date of September 3, no withdrawal was imminent, and so Britain formally declared war, soon followed by France and the Commonwealth countries. Unfortunately, a surprise invasion by the USSR meant that the Polish campaign was over in less than a month, before any meaningful assistance could be rendered. The Allies and Germans then faced several months of non-combat, known as the "Phoney War" or "Sitzkrieg." Following the fall of Norway, Chamberlain faced an extremely stormy debate on the whole issue in the House of Commons and calls for his resignation. The Government won, but only with a majority of 31, which Chamberlain felt was enough for him to resign, with Churchill taking over on 10 May 1940 (the day the Germans started their long-anticipated invasion of France).

Chamberlain did not have very good relations with a number of Parliament members — he just wasn't a very sociable person, though only a few actively despised him. He also committed a serious public relations blunder in the short gap in-between issuing Hitler his ultimatum and going to war, in that he didn't actually reveal publicly that he'd given Hitler any ultimatum, and gave evasive answers when questioned in parliament as to whether or not he would. This ended up resulting in deputy Labour Party leader Arthur Greenwood, who had a reputation as a doddering, ineffectual old fool, suddenly producing the speech of his life and savaging Chamberlain for seemingly sticking to his appeasement policies against all logic. Though Chamberlain had every intention of going to war with Germany if need be, his mishandling of the situation ended up badly undermining his authority for the rest of his time in office. Still, Chamberlain remained a respected member of Winston Churchill's War Cabinet and had a key role in forming the Special Operations Executive until his death from cancer six months afterwards.

Despite the agreement, there are a number of historians who have a more positive view of Chamberlain today with many noting that his contributions to working conditions in factories and the time he bought for Britain were absolutely vital in letting the country prepare for war. For instance, the Chain Home radar system and RAF Fighter Command structure that won the Battle of Britain were developed under his premiership, to say nothing of the Supermarine Spitfire and Hawker Hurricane that actually did the fighting.

You will have noticed that thus far this page has been primarily concerned with Chamberlain's foreign policy. This would have greatly annoyed him. Neville Chamberlain was first and foremost a domestic politician, viewing his Prime Ministership as the jewel in the crown of a domestic reformer and a tireless campaigner for social issues. His premiership saw the passing of: the Factories Act of 1937 placing limits on the working hours of women and children; the Holidays with Pay Act of 1938, giving workers ten days paid holiday a year; the Coal Act of 1938, (kind of) nationalizing the coal industry; the Housing Act 1938, introducing slum clearance and rent control; and several other measures aimed at alleviating poverty and want in the UK. Sadly, most had to be shelved due to the outbreak of the war; two other policies he wanted to push through but couldn't due to the war were a reform of local government procedures and raising the school-leaving age to 15.

Prior to his premiership, he held a variety of government positions (notably two terms as Chancellor and three terms as Minister of Health) where he consistently advocated such reform measures, notably his passionate support for unemployment compensation. He was roughly in the middle of British politics during his age - he advocated a restructuring of the economic system and welfare payments to the needy, unlike many other Conservatives, but was against the nationalising of industries and redistribution of wealth advocated by the Labour Party. Unlike the (very) aristocratic Churchill, Chamberlain's father (Joseph Chamberlain, himself a very influential politician) was a self-made businessman, Unitarian, and keen radical reformer who passed his passion for improvement down to his son. Notably, Chamberlain was more fondly remembered by the British working classes than Churchill, who was hated by many (even after the war) for his suggestion that tanks be deployed against strikers. He also oversaw the first significant improvement in relations between the UK and Ireland since Irish independence in 1922.

Chamberlain is the last PM to date who never faced the electorate as party leader or Prime Minister; his predecessor Baldwin had fought (and won) the general election of 1935, and his successor Churchill would fight (and lose) the subsequent general election, in 1945.

That Other Wiki has plenty of information about him