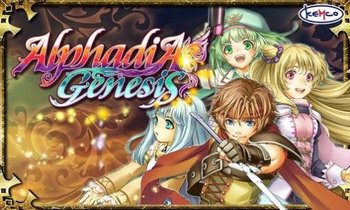 Alphadia Genesis is an Eastern RPG Mobile Phone Game released in 2014 that acts as a prequel series to the other Alphadia games by taking place in the same universe at an earlier period of time. Along with its mobile platforms, it is also available on Steam and Wii U.

After the lengthy Energi war left humanity all but devastated, the nations of the world ended the fighting by banning the use of clones as weapons. While this ended the war, a movement for recognizing the rights of clones soon followed. Fray, a local mercenary who is widely recognized for his skills and works, is called by his king to join an investigation into a pair of clones that had violated the orders of their master and taken a life. Being one in favor of clone rights, Fray takes the job in order to find the cause lest all clones in the world be destroyed as a result.

Has a direct sequel in Alphadia Genesis 2.