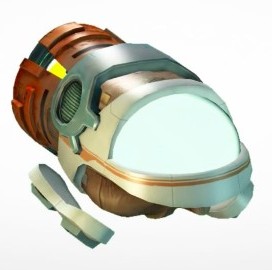 It's completely safe!
Uexplore provides you with a small, safe, cheap, and functional spaceship called Small Craft. Now you too can be a pioneer space explorer and discover uncharted alien planets at your leisure. Explore the wonders space has to offer and enjoy amazing scenery in never before seen worlds!
"But isn't space dangerous?" I hear you ask. Well, we have every contingency covered: nothing can go wrong!
Advertisement:

Affordable Space Adventures is a sci-fi horror stealth puzzle game developed by KnapNok Games and Nifflas' Games and released exclusively for the Wii U on April 9th, 2015. Enticed by the promise of an "affordable space adventure", you've bought yourself a well-crafted Small Craft™ and have allowed yourself to be transported by the trustworthy Uexplore to a newly discovered planet to explore and map out your own plot of land. At least, that was the plan before the transport ship crashed and killed almost everyone on-board. Now you're forced explore a world hell bent on your destruction, dodging alien plant-life, security drones, lasers, harsh weather, and terrors beyond scientific scope as you attempt to send a distress signal back to Earth. But hey, at least your Small Craft™ is at peak condition...right?

We here at Uexplore announce the following tropes associated with Small Craft.