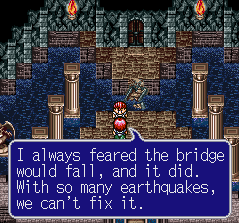 An obstacle that prevents you from progressing to the next Adventure Town and advancing the plot further. Once this plot advancement has occurred, the bridge is fixed. Named for one of the most common methods, a bridge that's out/fallen.

This is often a method of "Railroading", as it allows the game designers or GMs of Tabletop RPGs to follow a specific path until the plot has reached the desired point.

Not necessarily a literal bridge — the trope applies to any random obstacle that exists just to keep you from going Off the Rails. Some of the more common non-bridge examples:

If you're lucky, the removal of the broken bridge will logically follow from solving the Fetch Quest (i.e., the person who removes it will be the one you helped in the fetch quest), but many game designers aren't that devoted. Often the fetch quest is just a Solve the Soup Cans puzzle, and the broken bridge just happens to be solved independently while you're off retrieving the girl's necklace or whatever. Another logical solution is to use The Great Repair on a damaged transport.

If the heroes go off to fix the bridge, there may be villains to defeat or some plot twist revealed.

Tool used by designers to keep you on the One True Sequence. Event Flags are how they implement this. A poorly-designed broken bridge (from a mechanical standpoint) will often be the victim of clever gamers. Don't go crying if there's an Empty Room Psych on the other side though.

May overlap with Insurmountable Waist-Height Fence, if the characters should logically be able to bypass or remove the obstacle but can't because the plot says so. Border Patrol is a variant on the "impossibly strong enemy" idea mentioned above. In mythology, a similar concept is called Threshold Guardians and finally the Beef Gate for when the threshold in question can be overcome if your character(s) have become strong/skilled enough to overcome the aforementioned threshold.

While they both use monsters, Beef Gates are different in that a Beef Gate could be beaten by Level Grinding, skilled play, or exploits. If the monster is made of invincibility until the plot says otherwise, it's a broken bridge.

If something appears to be a broken bridge, but never actually lets you by at any point in the game, see Missing Secret. Ability Required to Proceed is a subtrope of Broken Bridge. In this case, gaining new powers serves as a way to "repair" the bridges and move forward in the game.

If a broken bridge or other obstacle prevents you from returning to earlier areas, it's a Point of No Return. Compare Inescapable Ambush.