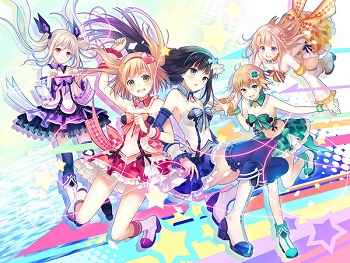 In a World... on the verge of destruction, singing might be their only hope.
Omega Quintet (オメガクインテット) is a video game developed by Galapagos RPG, a subsidiary of Compile Heart, for the PlayStation 4. It has been described as a hybrid between an idol simulation game and a Japanese role-playing game. The player plays as Takt, the manager of the Verse Maidens, an idol group that use the power of song and dance to fight off a phenomenon called the "Blare" and save the world.

Omega Quintet is the first game by Compile Heart for the PlayStation 4, the first JRPG for the system, and also the first retail game for the PS4 to utilize Playstation Move. It was released in the West by Idea Factory International in early 2015, and was then ported to PC in 2017.