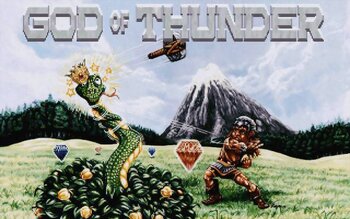 A DOS-based Puzzle Game by Software Creations in 1993, following the story of Thor (the titular God of Thunder), as he attempts to free Midgard from evil using his trusty hammer Mjölnir.

God of Thunder involved pushing rocks into various formations, using the hammer to trip switches and kill bad guys, and — eventually — defeating a Big Bad somewhere along the way, which brought forth the Rainbow Bridge and opened the way to the next episode or section of the current episode.

God of Thunder contains examples of: