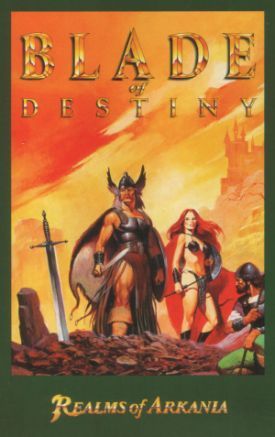 The Realms of Arkania PC games, also known as the Northern Reaches Trilogy, are three RPGs based on the 3rd edition of The Dark Eye. They were developed by attic Entertainment Software and initially not planned to be released outside Germany, but due to the first game's success, it and its successors were translated into English and published internationally (by Sir-Tech in the US).
Advertisement:

In the first part, Blade of Destiny (released originally in 1992, internationally in 1993), the player's party of adventurers is tasked to find a legendary sword, Grimring, in order to stop an Orc invasion. The objective of the second game, Star Trail (1994), is to find and deliver the Salamander Stone, a symbol for an alliance between Elves and Dwarves. Shadows over Riva (1997), the third part, has a more elaborate plot about Elf-Orc crossbreeds, a secret underground organization and telepathic worms.

Gameplay takes place in three perspectives: First-Person Perspective (in pseudo-3D in Blade of Destiny) in towns and dungeons, Isometric Projection in combat, and a world map view when travelling (except in Shadows over Riva where travelling is not possible). The trilogy was and still is popular for its depth and complexity (owing to it being a relatively faithful conversion of the pen and paper system), its open world, immersive atmosphere and its plot.

Realms of Arkania provides examples of the following tropes: