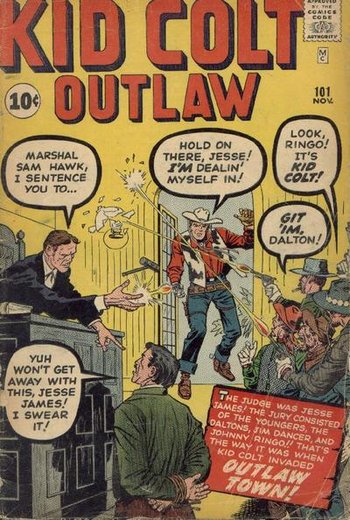 In an Outlaw Town, one should expect a Joker Jury.
Advertisement:

A Sub-Trope of Wretched Hive, an Outlaw Town is a town (or other settlement) run specifically for the benefit of criminals on the run. It gives them a place to lay low till the heat is off, and spend or store their ill-gotten gains.

An Outlaw Town differs from a normal city with high levels of corruption in that the Outlaw Town is entirely run by criminals and all of its inhabitants are criminals. Unlike a corrupt city, there will be no honest citizens sick of the corruption, no honest cops battling the system. Any inhabitants who are not on the run themselves will be knowingly providing services and shelter to wanted criminals (which makes them criminals themselves) and any 'law' that exists will be the personal enforcers of the boss of the town. Also Outlaw Towns will often not 'officially' exist on any map; being located in remote locales and their existence known only to the underworld.

Compare and contrast with Totalitarian Gangsterism, in which although the town is run by criminals, the civilians are not criminals (which can cause conflict).