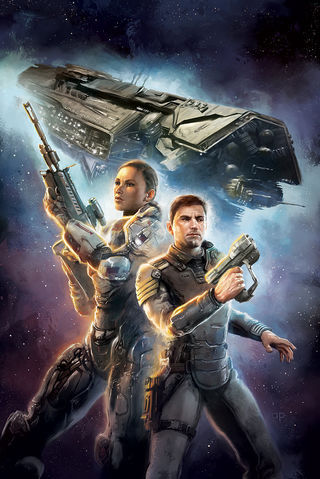 Halo: Escalation is a 24-issue comic series published by Dark Horse Comics from 2013 to 2015, set in the Halo universe. Set in the aftermath of Halo 4, the series shows the effects of Halo 4 on the wider galaxy, and also serves as a prelude for Halo 5: Guardians.

Issues #1-3: In the aftermath of Spartan Ops, the UNSC Infinity accompanies Fleet Admiral Terrence Hood to help negotiate a cease fire between the Elites under Arbiter Thel 'Vadam and a Brute pack under Chieftain Lydus. But when the negotiations are attacked by rogue Covenant forces, the UNSC must deal with the possibility that they've been betrayed from within.

Issues #4-6: As Captain Thomas Lasky, Spartan Naiya Ray, and journalist Petra Janacek search for the spy who helped sabotage the Elite-Brute negotiations, Lord Hood and the Infinity discover information indicating that the long-lost UNSC Spirit of Fire is stranded deep within Brute space.

Issue #7: Eight months after the "New Phoenix Incident", Spartan Gabriel Thorne attends the reopening of his old hometown, in an effort to settle the ghosts still haunting him.

Issues #8-10: During the 72 hours after the end of Halo 4, the Master Chief reunites with Blue Team to investigate an incident on Installation 03, where he ends up facing one of his greatest dangers.

Issues #11-12: Spartans Ray and Thorne are sent to an unclaimed world on the border of the Joint Occupation Zone to investigate a deadly Covenant-developed bioweapon.

Issues #13-16: The crew of the Infinity have their rematch with Jul 'Mdama's Covenant, in a fight for control over the Janus Key. All the while, 'Mdama has to deal with dissension from within the ranks regarding his alliance with Dr. Catherine Halsey.

Issues #17-18: An interlude concerning the origins of Spartan Holly Tanaka.

Issues #19-24: The Infinity's crew once again battle Jul 'Mdama's forces, this time for control over the Forerunner relic known as the Absolute Record.