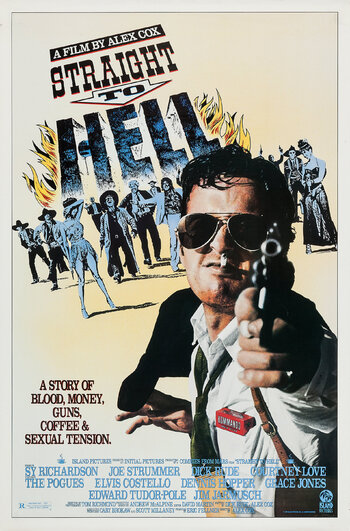 Straight to Hell is a 1987 Affectionate Parody of spaghetti Westerns, directed by Alex Cox (of Repo Man fame). Though far from his best film, it still holds cult status for many on account of its All-Star Cast of punk elites, including Joe Strummer, Elvis Costello, and The Pogues.

Three hired guns, Simms (Strummer), Willy (Dick Rude), and Norwood (Sy Richardson), sleep in and blow their job. Taking Norwood's pregnant girlfriend Velma (Courtney Love) with them, they rob a bank and flee to an Outlaw Town run by the McMahon gang (The Pogues), a family of maniacal coffee addicts hell bent on finding the heroes' riches. Hilarity Ensues.

It may not be terribly well directed, or acted, or edited, or... anything, really, but it's regarded by fans to be So Bad, It's Good. And anyway, as you'd expect with a cast and crew of musicians, the soundtrack's pretty damn good.

Has nothing to do with the song by The Clash, despite starring their frontman as the main character.