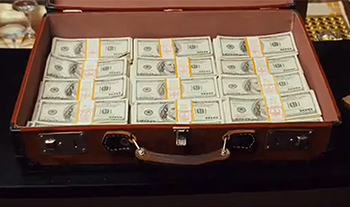 "Thank you, Fat Tony. However, in the future, I would prefer a nondescript briefcase to the sack with a dollar sign on it."
— Mayor "Diamond" Joe Quimby, The Simpsons
Advertisement:

Whenever someone is offering someone else an obscene amount of money for whatever reason, it will be in the form of neatly stacked and bound stacks of bills in a briefcase, or, if the amount is even larger, a suitcase. This frequently appears where the people making the briefcase can't afford enough money and therefore try to pad out the suitcase with stacks of paper with a few dollar bills on top.

For accuracy, the briefcase should be a Zero Halliburton brand brushed-aluminum model

A full briefcase isn't really an obscene amount these days, relatively speaking. Assuming all $100 USD bills, an average-sized briefcase (25" x 18" x 4") could fit about US$2,400,000. An average attache case (18" x 12" x 4.5") is good for about US$1,000,000. That's obviously a lot of money, enough to make for a plausible bribe in most circumstances and a perfectly respectable sum if you plan to use it just for yourself, but not generally enough in the modern developed world to live on like a king, or sufficient to fund a significant enterprise. Years ago, the US Treasury stopped making bills bigger than $100 to make it more difficult to conceal large amounts of illicit cash. The European Central Bank followed suit in 2018* Though they are no longer issued, €500 bills are still legal tender. A briefcase as described above can hold €6,350,000 ($8,550,275 USD), whereas an attaché case can hold up to €3,213,000 ($4,326,304 USD)..

By the way, a briefcase filled with cash would weigh quite a lot: ten thousand American banknotes would weigh twenty-two pounds, twenty-four thousand would weigh fifty-three. On top of that, those cool aluminum suitcases weigh eight— as much as a carton of milk. Carrying a million bucks in a silver briefcase would thus be like carrying one of those jugs that go on top of water coolers — in one hand. However, you never see anyone struggling to lift the suitcase. You're also unlikely to see the suitcase enthusiastically spit out the excess bills that have been crammed into it when it opens, to make sure that everything's neatly stacked inside when the audience gets a look.

To get around inflation, the briefcase will sometimes contain a portable money transfer device ready to send the undisclosed sum to the nameless Caymans bank of your choice.

This is probably the most common manifestation of A MacGuffin Full of Money. Can overlap with Handcuffed Briefcase.

As this trope is so common, only exceptions, parodies and subversions will be listed.

The winners of Total Drama receive a briefcase full of one million dollars in cash.

The winners of Total Drama receive a briefcase full of one million dollars in cash.