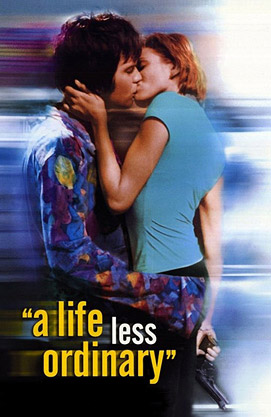 A 1997 rom-com by Danny Boyle that takes place in a world with very strange rules of morality: True Love reigns supreme and divine Fate is in danger of succumbing to human chaos, and very little else matters, morally speaking.

Ewan McGregor plays the down-on-his luck Robert, who impulsively decides to give a piece of his mind to his former boss after he loses his job, his girlfriend, and even his house, the last due to meddling angels Jackson (Delroy Lindo) and O'Reilly (Holly Hunter). When Robert storms into Mr Naville's office, however, things take an rather unexpected turn, and he ends up taking Naville's daughter Celine (Cameron Diaz) along with him at gunpoint.

Full of dark humor and Postmodernism, it's a fun ride, and an interesting take on the romantic comedy.