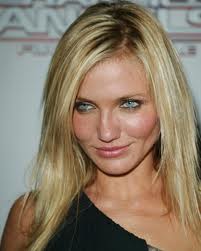 Sometime Charlie's Angel.
"Acting allows me to tell a lot of stories, you know start at the beginning, finish at the end, and tell everything in between."

She became famous during the 1990s with roles in the movies The Mask, My Best Friend's Wedding and There's Something About Mary.

Other high-profile credits include the two Charlie's Angels (2000) films, Bad Teacher and voicing the character Princess Fiona for the Shrek series. Diaz received Golden Globe award nominations for her performances in There's Something About Mary, Being John Malkovich, Vanilla Sky and Gangs of New York.

In 2016, she announced her retirement from acting.

Cameron Diaz and her works provide examples of: