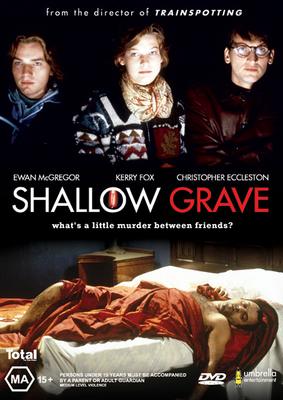 Shallow Grave (1994) is a British crime thriller film and Black Comedy starring Ewan McGregor in his first major film role, alongside Christopher Eccleston and Kerry Fox. Danny Boyle's directorial debut, the movie follows three friends who share a flat in Edinburgh. When their new flatmate, Hugo, dies suddenly of a drug overdose, they discover that the suitcase he brought contained a very large amount of cash. They decide to keep the money, disposing of the late Hugo in a shallow grave, and all seems well, until some of Hugo's associates come looking for him...