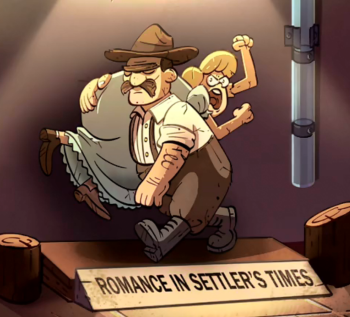 The phrase 'picking up women'
has an interesting etymology.
"And though they may be sobbin' for a while
We gonna make them sobbin' women smile!"
— Seven Brides for Seven Brothers
Advertisement:

Are you and your buddies looking for female companionship, but are denied the chance to interact with women in a normal manner because of your location, your occupation, or the fact that you all have No Social Skills?

Well, no matter. The problem's easy enough to fix. Just get your buddies together, form a raiding party, swoop down upon the nearest village and carry away all of its prettiest women. Of course, you can expect the pretty women to not be so keen on the idea, at least at first. Expect to see a lot of passive-aggressive behavior coming from their general direction... as well as the odd rock or frying pan... and you may want to wear a groin protector when you're walking around in their approximate vicinity... at least for a while...

Don't worry, though. They'll eventually come around and become willing mates for you all. You can speed up this process if you act sheepish and apologetic around them. Let them think you're just as sorry about the situation as they are angry. Do nice things for them. Smile when they jam their heels into your foot or dump freezing cold water down your pants or slam your fingers into windowsills. And know that one day, if you can endure this abuse long enough, they'll grow tired of beating on you and start to find you strangely attractive.

Hopefully, this will happen before the girls' fathers, brothers or friends find out where you live and turn you and your buddies into tomato paste. If you've behaved yourself and acted properly towards the women, you may get lucky and find yourself wed to your new sweethearts in a Shotgun Wedding. If not, then... it's best not to think about what will happen to you...

In some cases, the trope is subverted, with the woman a willing participant in the abduction; the stock excuse here is that she wants to escape an Arranged Marriage she finds unpleasant, but there may be other reasons. Her family will probably still want her back, though — or at least have a satisfactory explanation for what happened.

The extreme end of this idea of this includes And Now You Must Marry Me. See A Match Made in Stockholm when the kidnapping is done for other reasons than obtaining a mating partner while the end result is the same. See also Stockholm Syndrome, I'm Taking Her Home with Me!, and Captive Date. Obviously, Don't Try This at Home.