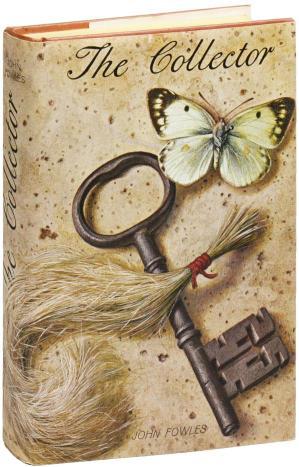 Frederick Clegg: I said, if you asked me to stop collecting butterflies, I'd do it. I'd do anything you asked me.
Miranda Grey: Except let me fly away.
Advertisement:

The debut novel of the English author John Fowles (who was later to write The French Lieutenant's Woman and The Magus), published in 1963.

Frederick Clegg, a shy, withdrawn, butterfly-collecting loser secretly seething with bitterness against society at large and women in particular, wins £73,091note about £1.5 million (or $1.9 million in American currency) in 2018 currency in the football pools. Immediately he quits his dead-end job as a lowly clerk, buys a Big Fancy House in the country, and uses his newfound wealth toward an elaborate scheme to abduct Miranda Grey, the beautiful and intellectual art student who he has been stalking from afar for months, believing that she was too far above him to approach. Imprisoning Miranda inside a luxuriously furnished but inescapable room in the cellar, Frederick showers her with gifts and admiration, believing that if only she sees how much he loves her, she will come to love him in return.

The story, shaped very much like a thriller, is told both from the viewpoint of the kidnapper and of his victim. The first half of the novel is narrated in the first person by Frederick as he coldly, logically, and convincingly explains his rationalization to the reader. The second half switches to Miranda's diary as she desperately chronicles her escalating terror, her frantic efforts to reason with her unreasonable kidnapper, her failed escape attempts, and her growing despair—before swapping back to Frederick for the book's sobering conclusion.