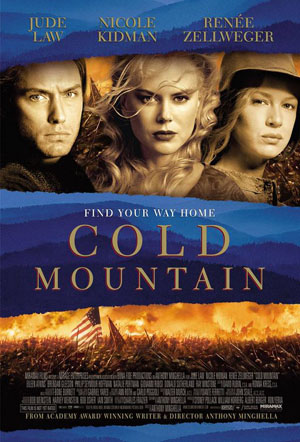 A 1997 novel by Charles Frazier (made into a film in 2003 directed by Anthony Minghella and starring Nicole Kidman, Renée Zellweger, and Jude Law) which tells the story of Ada Monroe, who moves from Charleston to rural Cold Mountain with her aging (and ailing) father for his health, and W.P. Inman, a terse but goodhearted young man. Just as Ada and Inman seem to be developing a relationship, Inman leaves to fight for the Confederate Army and, after being wounded in battle, decides to desert and walk through often hostile territory to get back home to Ada. Meanwhile, Ada's father has died and she must learn how to survive on her own.

So, as Inman is Walking the Earth to return to Ada, frequently encountering the worst and the downright bizarre of human nature, Ada learns slowly how to manage a farm with the blunt assistance of Ruby, a no-nonsense country girl, whose own drunk layabout father drops in from time to time.