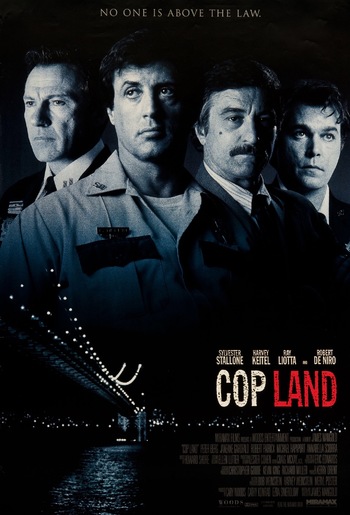 "I look at this town, and I don't like what I see."
Advertisement:

The story follows Freddy Heflin (Stallone), a New Jersey sheriff who is charged with keeping order in a tight-knit community of New York police officers. Such a neighborhood might be expected to handle its own business, and this is exactly how the residents see it. Thus, Heflin's authority is rarely taken seriously and he is often dismissed by the locals.

Matters around town are complicated when one of its members is involved in a questionable off-duty shooting and goes missing. It doesn't take long for Internal Affairs to come sniffing around in the form of Moe Tilden (De Niro), who thanks to jurisdiction must rely almost entirely on Heflin for his investigation to bear any fruit. Consequently, Heflin finds himself pulled in multiple directions, as more facts about the case—and about the town itself—begin rising to the surface.