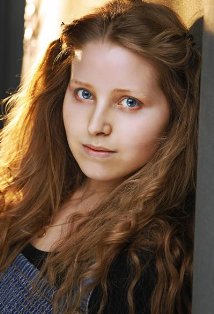 She can stop you in your tracks...
Jessica "Jessie" Cave (born 5 May 1987 in London, England) is an English actor who played Lavender Brown in the Harry Potter films. Before then, she was largely unknown, but got the role of Lavender thanks to her audition, in which she made out with Rupert Grint on a couch. She looked at the script, which wrote Lavender as a ditz, and then played this to the hilt, hamming it up for all to see. The result is an adorably despicable take on Lavender, and fame for Jessie Cave.
Advertisement:

Jessie is the creator of a website called Pindippy, which contains art and comedy sketches, some of which feature other former Harry Potter actors. She has also appeared in films and series such as Great Expectations, Wizards vs. Aliens, and Call the Midwife. As of 2016, she is also designing greeting cards, performing stand-up comedy, and raising her two children with her boyfriend, fellow stand-up comedian Alfie Brown. Despite sharing her last name with him, Jessie is not related to Nick Cave.