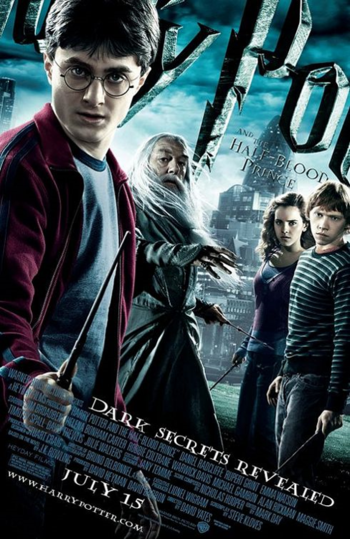 "Once again, I must ask too much of you, Harry."
"This is beyond anything I have imagined."
— Albus Dumbledore
Advertisement:

Harry Potter and the Half-Blood Prince is the sixth Harry Potter film, directed by David Yates and released in 2009.

The Ministry of Magic has finally accepted that Voldemort is back, but that's not really making the situation any better. With everyone terrified, obviously unjustifiable arrests, and misinformation still being printed, just in the other way, and events play out to show that the Ministry can't really stop Voldemort in its current form.

But while those events linger over the plot, the action stays fully grounded at Hogwarts. Harry learns more about Voldemort's Backstory, becomes increasingly suspicious of Snape's loyalty, and discovers an old potions textbook annotated with powerful spells and useful notes from its previous owner who identifies himself only as "The Half-Blood Prince". Furthermore, Draco Malfoy is tasked with something by Voldemort himself, and wacky romantic hijinks ensue for everyone.

After Goblet of Fire and Order of the Phoenix began cutting plots and characters left and right to fit as movies, this film has an air of just going with it, and happily continues in the direction set by the films so far, cuts and all. Perhaps most notable is the major factor that the final book had been released by this film's premiere, allowing this film to begin some heavier foreshadowing of the next films since the ending of the story was finally known.

Followed by the final story, which was split into two films: Harry Potter and the Deathly Hallows, Parts 1 and 2.

Harry Potter and the Half-Blood Prince contains examples of: