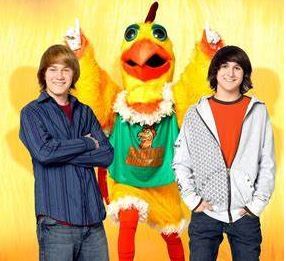 Brewster High School freshman Pete Ivey (Dolley) is introverted and socially awkward, but his best friend Cleatus Poole (Musso) is the school mascot, the Chicken. At a basketball pep rally, Pete tries to ask out super hot cheerleading captain and Cleatus' sister Camie (Thornton), before learning she's dating team captain Dill when he interrupts them. However, when Cleatus asks Pete to fill in the mascot position due to his suit allergies catching up with him, Pete is hesitant at first, but realizes it could be an opportunity to have fun and change his fortunes with girls. Following an out-there performance at the next game, Cleatus starts to get adoration from students but ire from Coach Mackey and teachers. He convinces Pete to be the Chicken full-time. After having done so for a while, Pete must eventually decide whether to stay hidden and let Cleatus keep getting the credit or reveal himself to potentially gain his long sought after and well-deserved popularity.